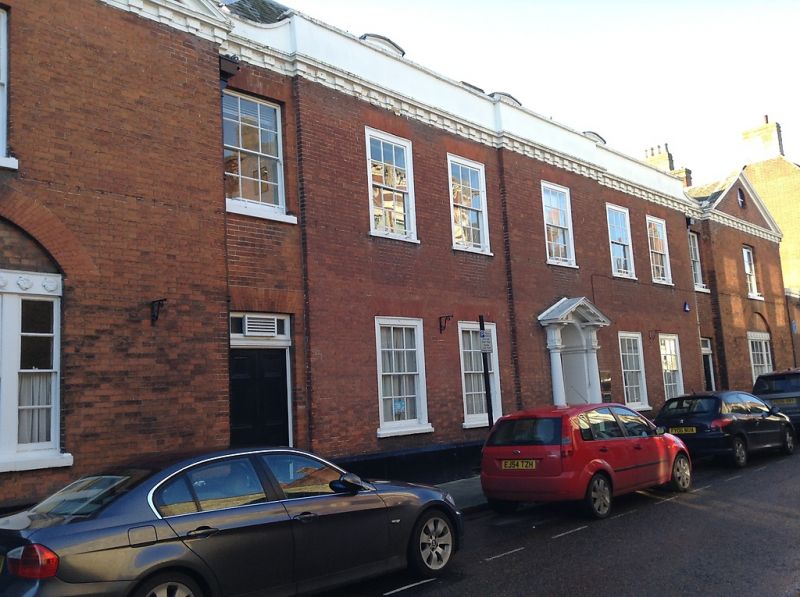 House, now offices. C18, with alterations and additions made
from 1789 to 1791 by the architect John Soane for James Oakes,
yarn merchant and later banker of Bury St Edmunds. Red brick;
part pantiled, part slate roofs.
EXTERIOR: 2 storeys, cellars and attics; a centre block with 2
flanking pedimented wings. The centre block has a stuccoed
parapet with a Ketton stone cornice, dentils and a plinth.
5-window range, arranged 2:1:2 with the centre breaking
forward slightly: all 12-pane sashes in flush cased frames
with flat gauged arches. A raised brick band at 1st storey
window sill level. 3 segmental-headed dormer windows. The
central doorway has a 6-panel door and a semicircular fanlight
with heavy ornate glazing; a fine Tuscan doorcase with an open
pediment and engaged columns.
The pedimented wings to north and south, added by Soane, are
linked to the centre block by narrow slightly recessed bays
which have a single sash window in plain reveals on the upper
storey and a 6-panel door with a plain rectangular fanlight
below.
The wings each have a 12-pane sash window to the upper storey
in plain reveals with a flat gauged arch. A tripartite sash to
the ground storey, set in a segmental-arched recess, has a
lintel ornamented with 9-leaf paterae. A circular lunette in
the tympanum of the pediment.
The north wing was designed as a counting-house with a dining
parlour for customers above: after 1794 it became the premises
of Oakes' Bury & Suffolk Bank. The south wing contained a
dining-room with drawingroom over. To the north and south of
the wings are flanking stretches of screen wall with brick
dentilled parapets; each of 3 bays, with recessed panels
divided by pilasters. On the ground storey the south wall has
two 6-panel doors and one sash window; the north wall has one
6-panel door. 2 rear wings: that on the north with a mansard
roof, slated on the upper slope, plaintiled on the lower.
Facing St Andrew's Street north, an early C19 range in brick
and flint, originally part of the yarn warehouses of James

Oakes, has a C20 link with the main building.
INTERIOR: extensive brick-lined cellars below the original
centre part of the building. Within the central range, a fine
late C18/early C19 geometrical stair and balustrade with a
moulded wreathed and ramped handrail, fluted open strings and
delicate turned balusters. A simpler rear winder stair has a
wreathed handrail and stick balusters.
The area between the 2 parallel rear wings has been made into
a large 2-storey hall with C20 roofing. A sash window in the
former back wall is semicircular headed with radiating glazing
bars. The Soane extensions to north and south have internal
window shutters with sunk panels. At the north end, a
fireplace with a fluted architrave and paterae.
(BOE: Pevsner N: Radcliffe E: Suffolk: London: 1974-: 151).