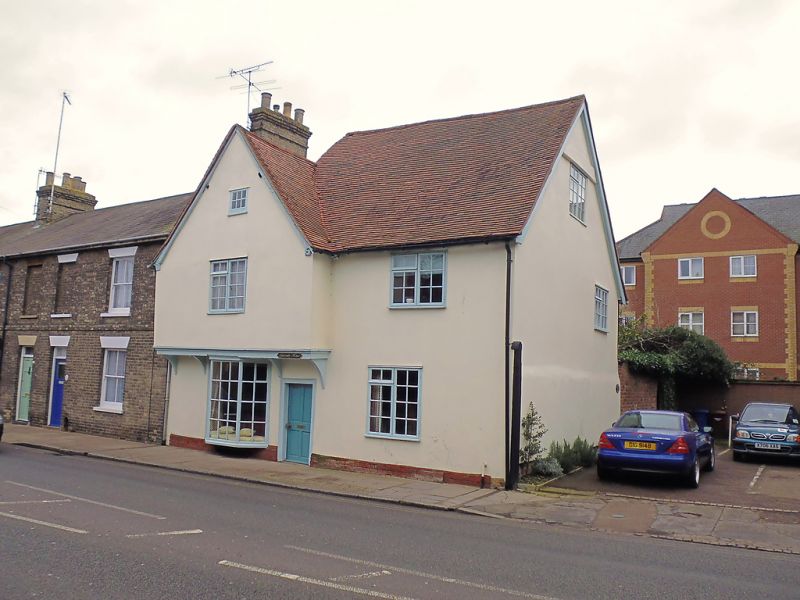 House, formerly divided into 2. Part C15, part C17, with a
single-storey C19 rear extension. Timber-framed and roughcast
rendered; plaintiled roof.
EXTERIOR: 2 storeys and attics. A gabled and jettied
cross-wing on the north side has a C20 small-paned 2-light
casement window to the upper storey and a small 6-pane fixed
window in the apex of the gable below an exposed cambered
collar-beam. On the ground storey, a canted 3-light bay below
the jetty with small-paned sash windows and an entrance door
with 4 sunk panels in a plain wood surround. The jetty is
supported by 4 small solid brackets.
The adjoining range to the south is higher than the cross-
wing. A single 2-light small-paned C20 casement window to each
storey, and similar windows in the gable end to the 1st storey
and attic. 2 internal chimney-stacks.
INTERIOR: with exposed timbers. The cross-wing is in 4 bays,
associated initially with an open hall. An internal stack
between the 2nd and 3rd bays has 2 back-to-back hearths on the
ground storey, each with a timber lintel. Rough unchamfered
joists to the ground storey ceilings, the joists more closely
spaced in the front jettied bay than in the remainder.
On the upper storey the wallplates have been raised slightly.
The roof, which has clasped purlins, appears to be a later
replacement. The south side is C17, with typical straight
primary braces and bisected studs. Ground storey ceiling with
joists set on edge. The internal spine wall has panels of comb
pargeting on the upper storey; this part of the house seems to
have been raised and widened.