A Grade I Listed Building in Bury Saint Edmunds, Suffolk 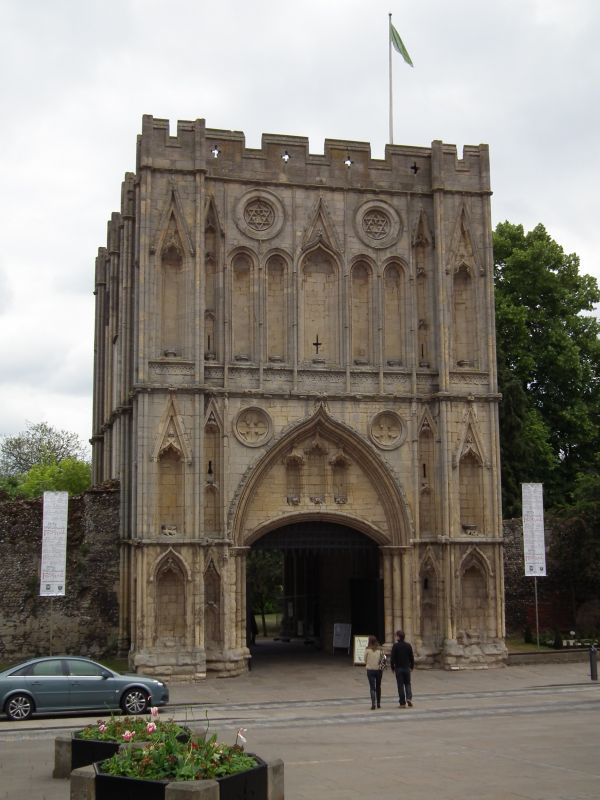 The great gate of the Abbey of St Edmund. Begun after the
riots of 1327 but before 1346; completed after 1353. Barnack
stone.
EXTERIOR: 2 storeys and battlements. The west facade is richly
decorated: a broad segmental entrance arch has 3 niches over
it and a large ogee gable above has foiled circles to left and
right. Buttresses to each side with ogee-headed steeply gabled
niches in 3 tiers, the top tier relating to the upper storey,
which has 5 tall blank niches. The taller centre niche has a
crocketed gable, flanked by 2 circles containing 6-pointed
stars. The east facade has a shafted doorway: leaf capitals to
the shafts and an arch with a double quadrant moulding. A
large transomed 3-light window to the upper storey. The
entrance arch leads from the Angel Hill into an outer chamber
with a longer principal chamber beyond it; between them are
C17 timber gates with heavy outsize dumb-bell balusters.
INTERIOR: the inner side walls of both chambers have large
blank arches with bold flowing tracery; both originally had
vaulting with ribs and tiercerons, now fragmentary. The
principal chamber on the upper storey has the remains of an
original fireplace.
Scheduled Ancient Monument.
(BOE: Pevsner N: Radcliffe E: Suffolk: London: 1974-: 138;
Official Guidebook: Whittingham AB: Bury St Edmunds Abbey:
London, HMSO: 1971-: 29).