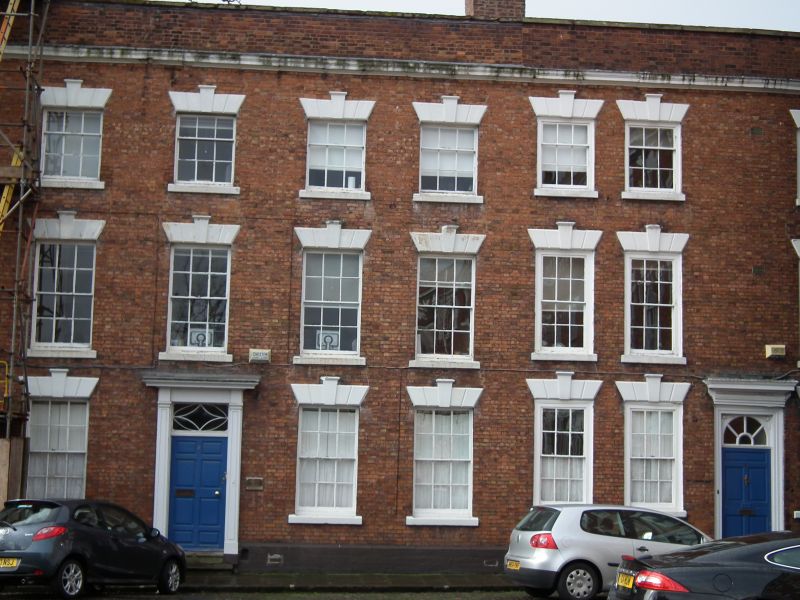 3 town houses, Nos 5 & 6 now offices. c1760. For prebendaries
or leaseholders from the Dean and Chapter of Chester
Cathedral. Flemish bond orange brick; grey slate roof not
visible from front.
EXTERIOR: cellars and 3 storeys. Rusticated quoins, painted
stone plinth. No.4 has 3 altered stone steps to shortened door
of 8 field panels with radial-bar fanlight with winged angel
head in each spandrel, in case with architrave, and hood with
frieze and pulvinated dentil cornice; No.5 has 2 stone steps
to door of 8 fielded panels and overlight with panes shaped as
concave lozenge in ellipse in case with panelled pilasters,
plain frieze and moulded cornice hood; No.6 has boot-scraper,
2 stone steps to door of 5 field panels with radial bar
fanlight having winged angel-heads and doorcase to match No.4.
A boarded rear access door at south end of No.4 and north end
of No.6. The window rhythm is varied; in first storey 2
recessed sashes; door; 2 recessed sashes; door; 2 recessed
sashes and 2 flush sashes; door; 2 recessed sashes, all of 12
panes. The second storey has a recessed sash over the door to
Nos 4 & 5, no sash over the door of No.6 and only one flush
sash to its north, all of 12 panes. A 9-pane third storey sash
over each second storey sash, 4 flush, 4 recessed and 3 flush.
Painted stone sills and rusticated wedge lintels with ornate
false keystones. Painted stone cornice and brick parapet with
plain stone coping; no external rainwater pipes; 2 ridge
chimneys.
INTERIOR: No.4 could not be inspected in detail, but has
features of similar type to those of other former houses on
west side of Abbey Square. No.5 has cellar with peripheral
walls of coursed sandstone on bedrock; wine bins; cellar door
covered. The first-storey south front room has door of 4
fielded panels, panelled shuttered embrasure, a blocked corner
chimney breast and a roll-moulded cornice. The north front
room has door of 4 fielded panels, panelled shuttered
embrasure, rail and cornice. The south rear room has door of 4
fielded panels, pilaster case to window, embrasure, a
fire-corner cupboard and a chamfered beam. The north rear room

has door of 5 fielded panels. Round archway with fluted
pilasters to closed-string dogleg stair with ovolo newel, 3
column-on-vase balusters per step and fielded dado panels. The
second storey has doors of 4 fielded panels. The 2
interconnecting front rooms have architraves to embrasures,
blocked fireplaces and cornices. The third storey has 4-panel
doors, a blocked corner breast, a blocked fireplace and
architraves to embrasures.
No.6 has cellar with coursed sandstone peripheral walls on
bedrock, brick partitions; brick barrel-vault to front
chamber, stone winder steps and door of 4 fielded panels. The
first-storey front south room has replaced door, fireplace
having side-cupboard with door of one fielded panel on old
long hinges with fluted pilasters to alcove above, a narrow
breast-side cupboard, 2 shuttered embrasures with benches, and
cornice. The close-string open-well stair has 3 column-on-vase
balusters per step and chamfered newels.
The second storey has a door of 4 fielded panels and a door
with 2 rows of 3 fielded panels; the south front room has 2
panelled shuttered embrasures with benches, a blocked
chimney-breast and a cross-beam with a lambs tongue stop at
its north end. The north front room has a panelled embrasure
with bench and a chamfered beam with lambs tongue stops. The
third storey has doors of 4 fielded panels, panelled
embrasures with benches and blocked fireplaces.
(Burne RVH: Chester Cathedral: London: 1958-).