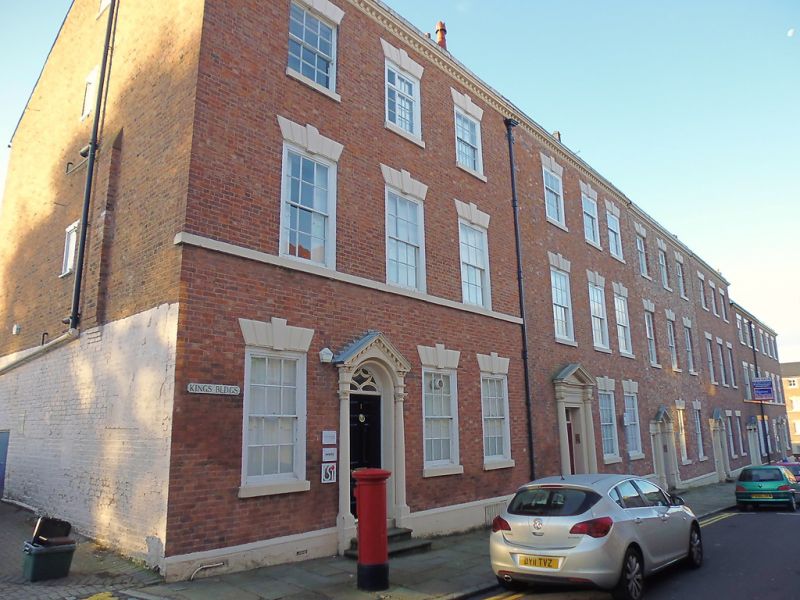 Terrace of 6 town houses, now houses, offices and flats. Dated
1775. Brown brick in Flemish bond to front and west end and in
English garden wall bond to east end and rear; roof of grey
slates, in diminishing courses to front with very large slates
at eaves.
EXTERIOR: cellars and 3 storeys. Painted stone plinth with
moulded cap. Stone steps to doors in pedimented cases: Nos 1 &
2 have 6 fielded panels, Nos 4 & 6 have 6 octagonal fielded
panels, Nos 3 & 5 have 4 fielded panels above 2 flush panels.
Roman Doric doorcases of stone, that to No.1 containing a
fanlight with a vase-shaped pane above 2 semicircles, that to
No.2 a 2-pane overlight, to No.3 a radial-bar fanlight and a
3-pane sidelight, to No.4 a radial-bar fanlight and 2-pane
sidelights, to No.5 a radial-bar fanlight and 4-pane
sidelights and to No.6 a narrower doorcase with fluted
pilasters and a looped radial-bar fanlight. The first and
second storeys have 12-pane sashes, flush to Nos 1, 2, 5 & 6
and recessed to Nos 3 & 4: three sashes to the first storey of
No.1, two to west of door to each of Nos 2, 3, 4 & 5 and
double-fronted to No.6. Three sashes to the second storey of
each house: No.1 has a replaced casement between two 12-pane
sashes in the third storey; the other houses have three 9-pane
sashes. All houses have painted stone sills; Nos 1, 5 & 6 have
a second storey floor-band; Nos 1, 2 & 3 have rusticated wedge
lintels with dropped keystones, Nos 4 & 6 flush wedge lintels
and No.5 painted gauged brick flat arches. Modillion cornices,
with slight variation between houses, stepping down between
Nos 2 & 3 and Nos 4 & 5.
The west end has a canted brick bay with cellar opening, 3
flush 4-pane sashes to the first storey, 3 wrought-iron
balconies to the second storey with French windows of 4, 3 and
6 panes, flush 9-pane sashes to the third storey, one with
glazing bars removed; painted stone sills and wedge lintels;
the brickwork behind the canted bay is largely renewed. The
east end is plain.

have 4-panel doors. The closed-string attic stair has a turned
newel and 2 stick balusters per step. The attic has a roughly
finished square purlin.
No.2 is flats; only the first storey and the stair could be
inspected. The east and west front rooms have doors of 6
fielded panels and ceiling cornices and the main back room has
a door of 6 fielded panels, window shutters and a ceiling
cornice. The open-string stair has a narrow open well,
patterned brackets, a double curtail, 3 turned balusters per
step, swept rails and swept panelled dado, probably all of
mahogany. The stair to the third storey, with square newels,
stick balusters and swept dado, is probably remade.
No.3 is flats; only hall, stair and second storey were
inspected. The hall has a wide doorway to the stair; the door
is glazed above paired panels, with margined overlights and
side-panels; between door and stair is a pilastered basket
archway. The open-string stair has a narrow open well,
patterned brackets, curtail, plinthed fluted newels, 3
plinthed square balusters per step, swept handrail and
panelled swept dado; the stair, 3 flights per storey,
continues with similar detail to the third storey. The fine
full-width, well restored front room, has skirting, dado,
broad pilastered fireplace with side-panels, large moulded
plaster panels with festoons and recessed corners, ceiling
cornice. The back room has a skirting, blocked fireplace,
panelled embrasure to Venetian window and ceiling cornice;
kitchen with cornice.
No.4, now flats, has a stair similar to those described, but
probably simpler; the rooms could not be inspected.
No.5 is offices. The rooms, some of which are sub-divided, are
stated to retain pre-conversion features; between hall and
stair a basket arch on pilasters; the open-well open-string
stair has patterned brackets, curtail, 3 plinthed square
balusters per step, some damaged, and fluted square newels; a
door of 5 fielded panels; upper doors are covered.
No.6, partly used as doctors' surgeries in 1990, has full
cellars of brick, that to the rear being barrel vaulted, with
stone steps. Hall with probably Edwardian pair of glazed inner
doors, tiled floor, doors of 6 fielded panels to front rooms
and rear west room, modillion cornice and round archway with
fluted pilasters to open-well open-string stair with patterned
brackets, curtail, 3 plinthed turned balusters per step,
turned newels, swept rail and swept panelled dado, all of oak.
The first storey front west room has skirting, panelled
embrasures and ceiling cornice; the front east room has
panelled embrasure and cornice; the rear rooms have no
features. The Venetian window to the first landing has
pilasters. The second storey has doors of 6 fielded panels;

the front west room has partitions, not affecting the
structure, probably original fireplace with mantel on consoles
and carved seashell on a shield, sub-panels and panelled
shutters to embrasures and modillion cornice; the back west
room, not inspected, is stated to be unaltered; the front east
room has a simple marble fireplace, panelled embrasure and
cornice. The stair to the third storey, not above the lower
stair, is similarly but more simply detailed. The third storey
has cornice to stair-well, 6 doors of 6 fielded panels, basket
archway with pilasters and double keystone to the front suite
and architraves to embrasures. Small loft with simple stair;
simple roof-structure with purlins.