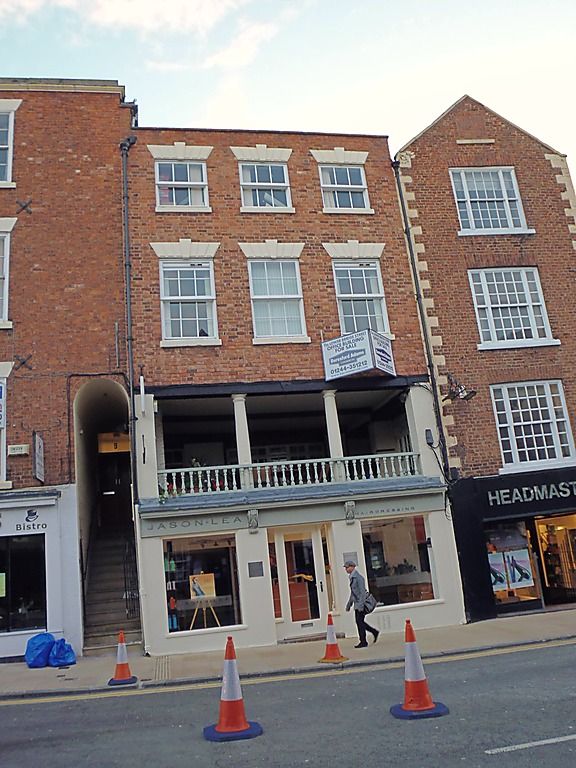 Undercroft and town house, now shop and offices. Undercroft
pre C18, extended C18; frontage c1760; cellar C19. Sandstone
and brown brick in Flemish bond to front; some render; hipped
grey slate roof with ridge at right-angle to front.
EXTERIOR: cellar and 4 storeys including street and Row
levels. The rendered shopfront has, in the front wall, a
simple 1-pane window to each side of a modern glazed door with
sidelights; fascia has 2 moulded brackets and lead flashing.
The Row, reached from stair in No.9 Lower Bridge Street (qv),
has timber rail on turned balusters to front, rendered end
piers, 2 unfluted Doric pillars, a level stallboard 3.3m from
front to back, a boarded Row walk and a timber bressumer, 2
beams probably of oak across the south end, a replaced door of
6 fielded panels with 3-pane overlight and a replaced window
to rear of Row walk.
The third storey has 3 almost flush 12-pane sashes and the
fourth storey three 6-pane sashes. Some sashes are replaced,
with horns; all have painted stone sills and rusticated wedge
lintels with false keystones. Parapet with plain coping;
lateral chimney, south.
The rear has replaced door in round-arched opening and
replaced windows in openings with cambered heads, one to the
second storey and 2 each to the third and fourth storeys.
INTERIOR: has a probably early C19 rock-cut cellar 2.4m below
floor level with damaged rock-cut steps. The pre-C18
undercroft has features covered. Beginning 11.75m behind
street the C18 rear extension is barrel vaulted in brick; no
evidence of access from Row level. The Row storey has a
side-passage, doors of 6 fielded panels, an open-well
open-string stair with shaped brackets and 3 column-on-vase
balusters per step; the under-stair cupboard has a 4-panel
door on HL hinges. The third storey landing has a probably
early C18 archway; doors of 6 fielded panels; the fourth
storey front room has skirting, dado rail with one row of
linenfold panelling beneath and 2 rows above; cornice at
door-head level; king-post truss and purlins.
(Chester Rows Research Project: Grenville J: Lower Bridge
Street East: 1988-).