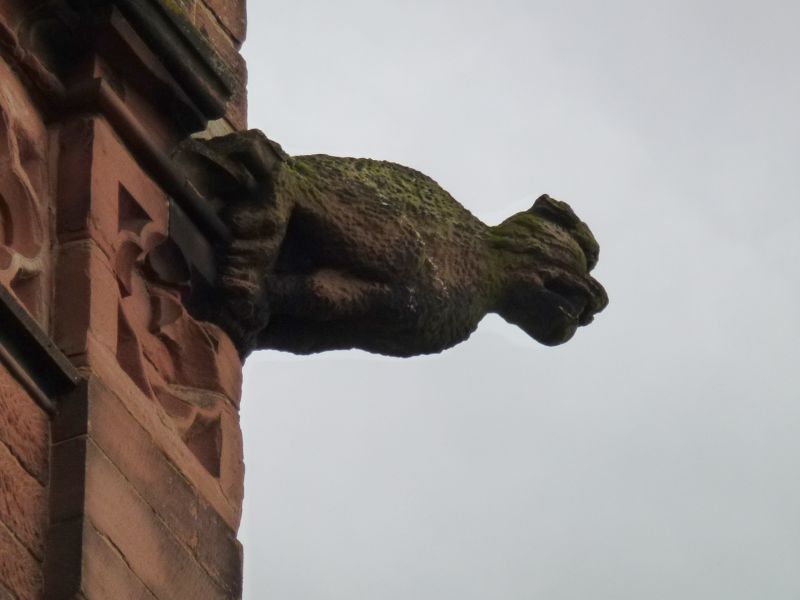 Parish church now educational centre. C14 and c1500, restored
1861-2 by James Harrison and 1890-92 by JP Seddon and (without
deconsecration) converted to an educational centre 1970s by
County Architect's Department for Cheshire County Council. Red
sandstone with low-pitch roofs.
PLAN: 3-stage west tower, 3-bay aisled nave continuous with
chancel and aisled chapels, north porch and 2-storey south
porch, now office.
EXTERIOR: the tower has diagonal west buttresses, west door
c1500 with arch of 2 stones with quatrefoils above, quatrefoil
band beneath 4-light Y-tracery west window, stringcourse with
Tudor roses beneath paired Y-tracery bell-openings under
4-centre arch; the top stage, 1861-2 by James Harrison, has
gargoyles, quatrefoil band beneath panel-and-quatrefoil
pierced crenellation with eight pinnacles. Refaced west end to
south aisle has a 2-light Y-tracery window. 3 steps to framed
and boarded oak door in south porch; band with carved-head
stops; diagonal buttresses; upper window of 3 trefoil-headed
lights. 3 traceried 3-light windows to south aisle, earlier
than tower. 6 simple 3-light clerestory windows. The
south-east chapel has 3 panel-traceried 3-light windows, a
low-level boarded oak priest's door in a moulded archway and,
in its east end, a 4-light panel-tracery window; the chapel
dates from 1443 but was rebuilt in 1693. The rectangular
buttress between chapel and east end of nave is capped with a
medieval carving of the winged lion of St Mark. The east
window of the nave is 5-light with panel tracery under a
2-centre arch. The north-east chapel has a 5-light
panel-tracery east window under a 4-centre arch. The north
side of chapel and nave aisle has five panel-tracery 4-light
windows under 4-centre arches. The north clerestory has 6
lattice-leaded windows of 3 trefoil-headed lights under
depressed arches. The north porch rebuilt in 1892 by JP Seddon
at the expense of Cheshire freemasons has octagonal
buttresses, moulded archway, crenellated gable and, in the
unaltered back wall, double boarded doors of oak; small

commemorative window 1892 by Shrigley and Hunt.
INTERIOR: full-height tower arch, probably C14; 3-bay nave
arcades have octagonal piers and twice-cambered 4-centre
arches; fine camber-beam roof of 40 panels per bay with some
120 bosses, gilt and painted 1970s. The aisles have rebuilt
camber-beam roofs. 2 steps under C14 chancel arch, dying into
responds which slope outward as they rise. Chancel has 4-bay
arched wooden roof, apparently rebuilt in restoration; a broad
4-centre arch to north chapel and a slightly-pointed arch to
south chapel; plastered east wall. The chapels have probably
rebuilt oak roofs.
STAINED GLASS: the east window 1857 by Wailes in memory of WH
Massie, Rector; east window of north chapel, damaged, has 2
lights of Crimean War Memorial c1856 by Hedgeland; north-west
window of the 4 Evangelists in memory of TB Oldfield, d.1858;
the east window of the south chapel has fragments of late
Perpendicular glass in tracery of E window, with memorial
glass 1865 by H Hughes to Mary L Barton; the south windows
have memorial glass to Georgina Burkridge Roberts, Thomas
Mawden, rector, and his sons, and wife, 1850 by Wailes, and to
John Hill and family.
MONUMENTS: amongst some 72 monuments and cenotaphs from the
C16 to early C20, the following are of individual note: Table
tomb to Thomas Gamul, d.1616 and his wife who erected it with
recumbent effigies attended by their children; alabaster
monument to Phillip Oldfield, with recumbent effigy; C17 wall
monuments to Randle Holme II and family, Randle Holme III and
IV; a Gothic Revival tablet by James Harrison to William
Currie, d.1834; Ralph Worsley, Sergeant of the Crown and
Warden of the Lions, Lionesses and Leopards in the Tower of
London, d.1573.
Since the early Middle Ages St Mary's Church was associated
with Chester Castle and subsequently with the County Gaol.
(The Buildings of England: Hubbard E & Pevsner N: Cheshire:
Harmondsworth: 1971-: 151-2).

This List entry has been amended to add the source for War Memorials Register. This source was not used in the compilation of this List entry but is added here as a guide for further reading, 26 January 2017.