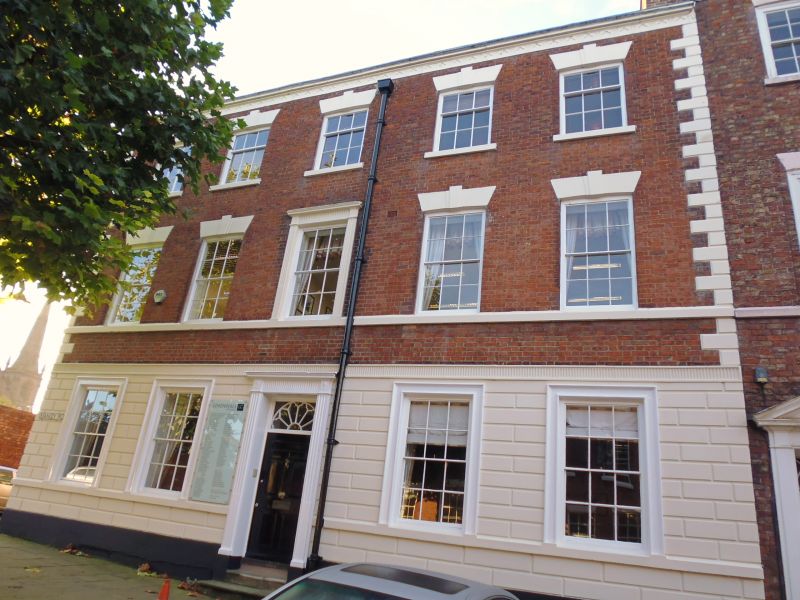 Includes: No.2 STANLEY STREET.
2 town houses, now an office. c1780. Stone and Flemish bond
red-brown brick with grey slate roof, hipped to street corner.
EXTERIOR: 3 storeys with symmetrical fronts, of 5 windows to
Stanley Place and 3 windows to Stanley Street, east. Painted
stone plinth, quoins and first storey to Stanley Place are of
painted rusticated stone; fluted Classical doorcase; sillband;
moulded architraves to windows; fluted frieze. 3 repaired
stone steps to door with 2 flush lower panels, 2 fielded
middle panels and a fielded top panel; the overlight is
expressed as a fanlight with cusped radial bars; 2 recessed
12-pane sashes to each side. The second storey has a sillband,
a central 12-pane sash in a fluted Classical case and 2
recessed 12-pane sashes to each side; the third storey has 5
recessed 9-pane sashes with painted stone sills; wedge lintels
to second and third storeys have false double keystones; the
cornice frieze to the parapet has recessed quatrefoils between
triple flutes; a chimney against the gable of No.3 Stanley
Place (qv).
The face to Stanley Street has a slightly projecting
full-height central bay with a door of 5 panels, now glazed,
in a modest case; a blocked window to north and a replaced
4-pane sash to south. The second storey has 2 recessed 12-pane
sashes and one replaced with 4 panes. 3 recessed 9-pane sashes
to the third storey; moulded parapet cornice returned at rear
end. The rear, of irregular form, has a 16-pane recessed sash
and a 12-pane flush sash to the second storey and two 9-pane
flush sashes to the third storey.
INTERIOR: the west front room has a door of 5 fielded panels,
a fireplace with dentil mantel on ornately carved pilasters,
panelled and shuttered window embrasures, a cornice and an
arched rear recess; a 5-panel door to the rear west room;
5-panel doors to the second storey, 4-panel doors to the third

storey. 2 open-string dogleg stairs; that to the west has
shaped brackets, square newels, plinthed stick balusters,
swept handrail and large-panelled dado; the steps and
balusters in the third storey are covered. The south-east
stair has shaped brackets, plain newels, plinthed balusters
and swept handrail; the steps are covered. Principal rooms
have cornices.
Nos 1-13 (odd) Stanley Place (qv) form a terrace, stepped down
to slope of the elongated square; all built within 2-3 years.
The houses, apart from No.1 which is larger and with a more
opulent facade, are of similar expression.