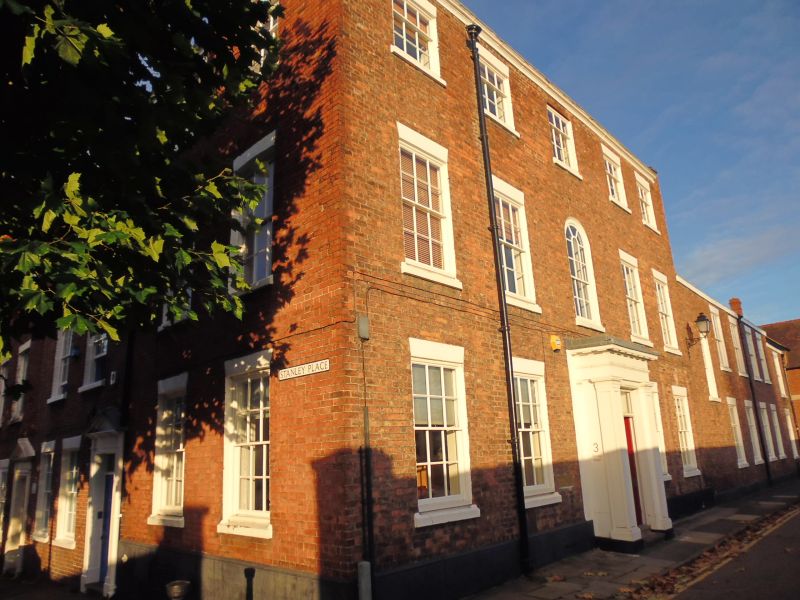 Town house, now offices. 1781. Red-brown brick in English
garden wall bond to Stanley Street and Flemish bond to Stanley
Place, south; grey slate roof, hipped to Stanley Place.
EXTERIOR: 3 storeys. The front to Stanley Place is
symmetrical; double doors with 3 sunk fielded panels in each
leaf, with one stone step and a plain overlight, are in a
probably added porch with square corner pilasters, quarter
pilasters against the wall and a full entablature. 2 recessed
12-pane sashes to each side of porch; flush stair sash above
porch has 6 panes to lower leaf and 9 panes to shaped upper
leaf in a plain brick round-arched opening; 2 recessed 12-pane
sashes to each side; five 9-pane recessed sashes to the third
storey; painted stooled stone sills and wedge lintels; moulded
cornice. Flush 2-storey north wing of separate build has a
plain lower plinth, five C20 replaced 6-pane hoppers to lower
storey, an arched stair window similar to that above the
porch, four recessed 12-pane sashes and one 6-pane hopper,
north, to the upper storey; painted stooled stone sills and
wedge lintels; plain wooden eaves fascia.
The face to Stanley Place has 2 recessed 12-pane sashes to
each of the first and second storeys, and 2 of 9 panes to the
third storey; painted stooled stone sills and wedge lintels;
moulded cornice as to Stanley Street; 2 west chimneys. The
altered gable end to the north wing has a recessed 12-pane
sash with cambered brick head to the second storey; the west
face is altered and extended.
INTERIOR: the hall has a substantial architrave to the south
room door, stone steps to the plain stone cellars, a 5-panel
door to the north room and a modillion cornice. The south room
has a door of 6 panels covered on the hall side, a row of
broad panels beneath the dado rail, panelled shutters in the
embrasures, cupboards with altered doors to each side of
chimney breast and a plastered frieze and cornice. The north
room and the lower storey of the north wing are largely
refaced. The principal stair of 4 main flights has open
strings with shaped brackets, 3 steps between quarter
landings, 2 plinthed stick balusters per step and swept

handrail with wreath. A modest open-well stair in the north
wing has turned newels, open string, simple shaped newels, 2
stick balusters per step and a swept handrail. The second
storey south room has a 5-panel door, embrasures with panels
beneath windows and panelled shutters, fire surround with
mantel on Tuscan columns and a plaster frieze and cornice; the
north room, now partitioned, has 5-panel door and plaster
cornice; the first room of the north wing has a C19 cast-iron
fireplace and wood surround and a cornice, the second room has
a good earlier C19 cast-iron fireplace in a restrained Gothick
surround. The third storey has doors with 4 fielded panels.