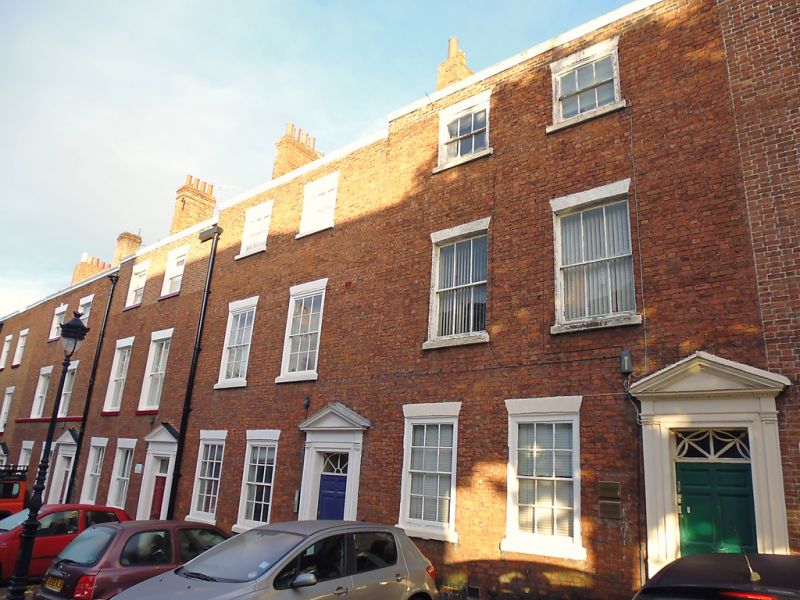 4 town houses, now offices, clinics, school classrooms and
flats. c1782. No.4 is now offices and clinics; Nos 6,8 & 10
are classrooms and flats. Flemish bond brown brick with grey
slate roofs.
EXTERIOR: 3 storeys with 4-storey rear wings which have roofs
hipped upward behind the main ridge. Vertical brick joints
between houses; each house has 2 sashes to each storey with
painted stone sills and slightly cambered painted gauged brick
window heads, similar cornices and west chimneys. The door
towards east of each house has 2 flush panels beneath 4
fielded panels, a stone step and an overlight; that to No.4
having looped radial bars and that to No.6 plain radial bars;
the doorcases have panelled pilasters and moulded pediments
with dentils. Windows in the second and third storeys are
inset from those in the first storey; the sashes were probably
originally flush; in the first storey Nos 4 & 6 have flush
12-pane sashes, No.8 replaced 4-pane recessed sashes and No.10
replaced 2-pane recessed sashes; in the second storey No.4 has
replaced 6-pane recessed sashes, No.6 flush 12-pane sashes,
Nos 8 & 10 have one sash of 4 panes and one with bar removed
from upper leaf; No.10 has a second storey sillband; in the
third storey Nos 4 & 6 have 6-pane flush sashes and Nos 8 & 10
replaced 4-pane recessed sashes; an ornate rainwater head at
east end of No.10.
The rear of No.4 has a long rear wing, perhaps servants'
quarters but now flats, with door of 4 fielded panels with
9-pane overlight adjoining main block, a slightly recessed
12-pane sash to the second storey, a 2-pane
horizontally-sliding sash beneath a slightly recessed 8-pane
stair sash, sashes of varied types to rooms in both storeys
and an inserted door of 6 fielded panels in the gable end. The
main block has a small lean-to with a tripartite sash to the
first storey, a 16-pane flush sash under a slightly cambered
gauged brick head to the second storey, an altered 6-pane
flush sash to the third storey and a 12-pane flush sash to the
attic.

No.6 has a flush sash east of centre to each storey; a 4-pane
flush sash to the attic; a rear wing of 2 storeys with ridge
parallel with the main block has a canted oriel added on the
second storey. The rear of Nos 8 & 10 have been rebuilt later
C20.
INTERIOR of No.4: Altered 4-panel inner door now part-glazed,
with side-lights in basket-arched opening with panelled
pilasters; doors with 6 fielded panels to front and rear rooms
and cellar; panels beneath window in one rear room;
open-string dogleg stair has shaped brackets, 2 steps at
half-landing, fluted newels, 2 plinthed stick balusters per
step; curtail step with wreath to swept handrail. The second
storey has 6-panel doors, fielded to principal rooms; the
front room, now divided, has a cornice. The stair continues,
at opposite side of house to third storey with plinthed square
newels, modest shaped brackets, 2 plinthed stick balusters per
step and a swept rail; doors of 4 fielded panels to third
storey rooms; a panel beneath each front window; a simple
cornice.
The interiors of Nos 6, 8 & 10 could not inspected.