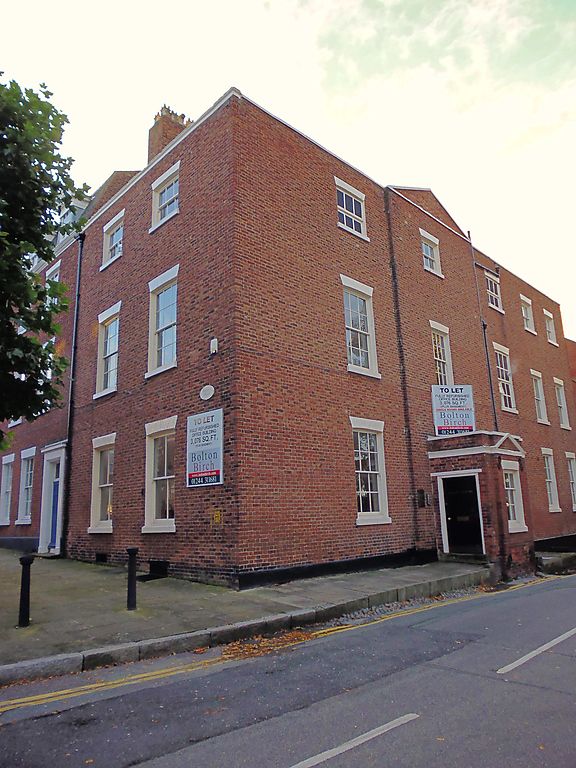 Town house, now barristers' chambers. c1780. Flemish Bond
brown brick with grey slate roof hipped to corner with City
Walls Road.
EXTERIOR: 3 storeys; painted stone plinth. The face to Stanley
Place has 2 recessed sashes to each storey, now of 4 panes to
first storey, 12 panes to second storey and 6 panes to third
storey; painted stone sills and slightly cambered painted
gauged brick heads; small cornice; 2 shared chimneys east, one
on roof slope and one at rear.
The face to City Walls Road has a raised stone pavement with a
weathered square sandstone post lettered B... on its south
face. The full-height pedimented central bay has an added
projecting sedan-chair porch, said to be the only example in
north-west England, with a 9-pane sash in a pedimented
aedicule to front, a cornice and 4-course stone-capped parapet
and a sedan-chair door of 4-fielded panels above 2 flush
panels in each return face; stone steps, one to the north
door, 2 to the south: the Chair-men entered and departed by
opposite doors, their passenger embarking or alighting under
cover at the house door between. The first storey has a
12-pane recessed sash in the north wing, a door of 6 fielded
panels to No.13B in a former window opening using the 6-pane
upper sash leaf as an overlight and 2 recessed 12-panes sashes
to the north wing, one of 16 panes to the central bay, a
blocked sash and 2 now of 4 panes to the south wing. The third
storey has 6-pane sashes, one blocked, in the north wing, one
in the centre bay and 3, one blocked, in the south wing; a
massive chimney against the rear gable-end; rainwater head and
pipe.
INTERIOR: door from the sedan porch is of 4 fielded panels
above 2 flush panels, in a basket archway under the stair; the
west room to Stanley Place has two 6-panel doors, panelled
shutters in one embrasure and a simple cornice; the east room
to Stanley Place has large panels beneath the dado rail, now
partly covered, and a damaged cornice; the south-east room has

a 6-panel door and a simple cornice; details are largely
replaced in all storeys of the south wing. The open-string
open-well stair has shaped brackets, curtail step, plinthed
stick balusters and swept rail with wreath. The secondary
stair, in No.13B, has diminishing and tapered newels and stick
balusters; the strings are enclosed. The second storey west
room facing Stanley Place has one panelled embrasure with
shutters; archway with pilasters from the stair-well to the
east room facing Stanley Place which has a panelled embrasure
with shutters; the south-east room has a 6-panel door and a
panelled embrasure with shutters.
The grade relates to the rare survival of a sedan-chair porch.