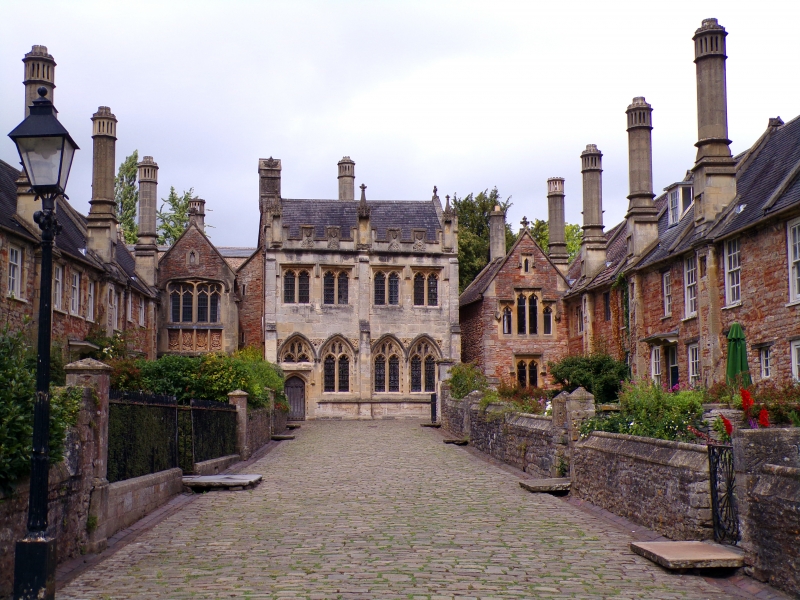 Private chapel, now used as schoolroom. c1424-1430 for Bishop
Bubwith or Bishop Stafford; bellcote probably c1450; some C13
carved detail incorporated on S front. Local stone rubble,
with Chilcote stone ashlar facade and dressings, Welsh slate
roof behind crenellated parapet, between coped gables, ashlar
chimney stack.
PLAN: chapel on the ground floor with entrance on S side to a
W screens passage leading to spiral stair in NW corner, and
lofty upper room originally a library. The chapel was built
against the pre-existing Liberty wall on the N side.
EXTERIOR: 2 storeys, two double bays. Plinth, sill string,
cornice mould, battlemented parapets, buttresses with 2
offsets to ends and between bays terminating in pinnacles
incorporating canopied niches for statues. Ground floor has
pair of 2-light pointed-arched, Perpendicular-traceried
windows with arched labels having headstops, with deeply- and
under-carved spandrels. In left unit of bay 1 the entrance
doorway, set under window tracery, not quite centrally, the
doorway being 4-centre arched, with moulded surround having
tablet flower decoration, the door mostly original, with
moulded cover strips, and a traceried top with shields bearing
the arms of Hungerford, the See, Stafford and Bubwith. First
floor has paired cinquefoil-cusped, flat-headed two-light
windows, having linked square labels with drops. Parapet has
uncarved shields in merlons, and set under these are four
roughly triangular carved panels of C13 work, possibly from
the old cloisters.
The west gable plain (with abutment from No.14, qv), the east
gable has two 3-light windows, the lower flat headed with
cinquefoil cusped lights, under a square label with headstops,
the upper window may be partly C19, with Perpendicular tracery
and semicircular arched head under label with floriated curl
stops. All windows on east and south sides have external
ferramenta.
On the north side, which fronts on The Liberty, is a chimney
stack, slightly projecting from first floor level on a moulded
corbel, terminating with moulded offsets, octagonal tall stack
and stone fret top.
INTERIOR: the lower floor, or chapel, has a narrow
cross-passage to the corner staircase, with a fine C15 screen
to the right; this returns on the N side in a late C19 or
early C20 extension against the wall, incorporating 9 figures
of saints on a gold background. At the E end are 2 lofty
niches with cusped aedicules, without figures, on short
lengths of panelled plinth, flanking the altar. The ceiling is
in heavy moulded timber beams in 4 compartments, each with
sub-compartments, and various carved bosses and
embellishments.
The upper floor has 5 trusses, the central one on moulded
brackets, in 4 bays of arch-braced principals with 3 purlins
and brattished plates; wind-bracing is in 3 ranges. The
entrance from the stair is through a high doorway with
4-centred head, and there is a C19 fire surround.
HISTORICAL NOTE: the dating of the Chapel is still under
discussion; Pevsner's BOE date of c1470-5 is evidently too
late. Rodwell (in Colchester, op cit) summarises the current
state of understanding. The building apparently did not have a
W entrance, although the adjoining No.14 was the house of the
'Senior priest vicar' according to a 1790 reference. Despite
the somewhat uncomfortable design of the doorway, the front
facing down Vicars' Close forms a very appropriate termination
to the upper end of the street.
(Colchester LS: Wells Cathedral: A History: Shepton Mallet:
1982-: 223; The Buildings of England: Pevsner N: North
Somerset and Bristol: London: 1958-: 320).