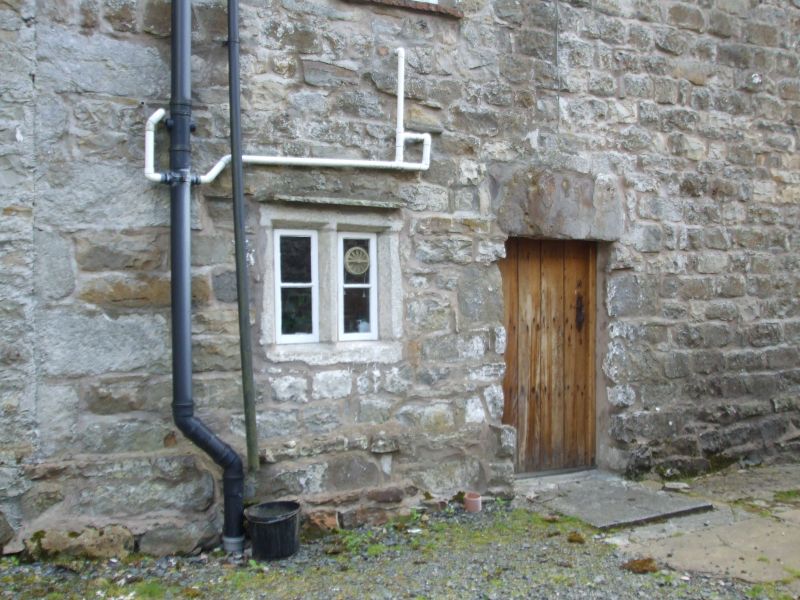 Farmhouse, now house. Probably later C17, altered and enlarged
in C19, and subsequently altered. Coursed sandstone rubble
with quoins (including C19 addition at west end which has
gabled west front painted white); stone slate roof.
Single-depth 2-unit plan, plus C19 1-unit addition to west
end; outbuildings continued at east end. Gable to road.
EXTERIOR: the north front has a rubble plinth to the older
portion, 2 large quoin-stones at the bottom of the junction
with the addition to the right, an ex-situ round-headed window
next to these quoins (recently inserted using original stones
found in adjoining field). Offset to left, a square-headed
doorway with a massive monolith lintel and an old board door,
a 3-light chamfered mullion window left of this, and at 1st
floor one rectangular window above each of those at ground
floor. Altered farm building attached to east end. Chimneys at
both junctions (i.e. former gables). The rear (south front)
has massive quoins to two-thirds height at the junction with
the addition, a round-headed 1-light fire-window near these, a
16-pane hornless sashed window to the right and another above
and between these. To the right a square 2-light casement to
ground floor and a smaller 16-pane hornless sash above that.
The gabled west front of the C19 portion has a doorway to the
right, 1 window to the left and 2 above, all these windows
with altered glazing.
INTERIOR: housepart in west bay has chamfered bressumer beam
with stop-chamfered bearers; large C18 stone fireplace with
moulded surround and corbelled lintel with fan-shaped false
key to the lintel; stone partition to lower end, which
contains former parlour with scored ceiling joists and C18
stone fireplace; massive principal-rafter roof truss with
principals half-lapped and pegged at the apex (but now lacking
tie-beam); Dent marble fireplace in C19 addition.