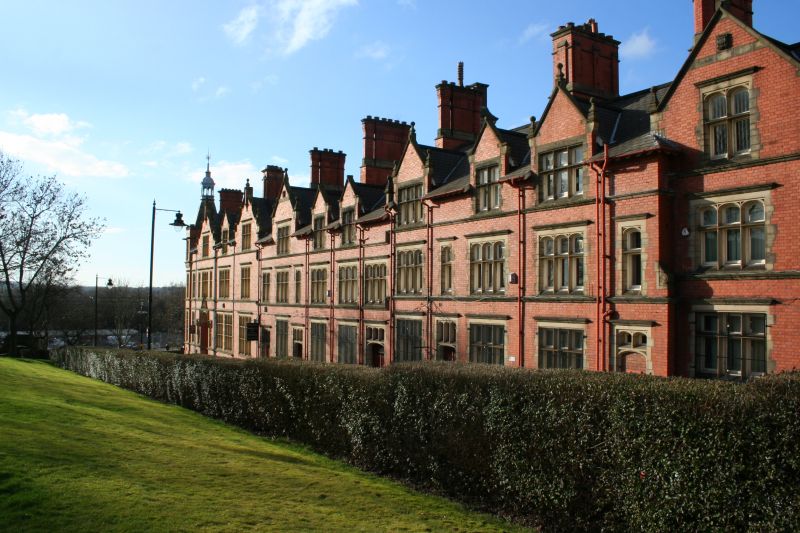 County court building. 1898, by Henry Littler. Red brick in
Flemish bond, with sandstone dressings and slate roof.
Approximately square plan on corner site (continuing the
Magistrates Court and Police Station range). Elizabethan
style.
2 and a half storeys over basement, 4 bays, with sillbands to
all floors, a canted turret to the left corner and 3 unequal
stepped gables. The 2nd bay contains a large depressed
entrance archway with chamfered surround and moulded head
containing a recessed Tudor-arched doorway with tympanum
lettered "COUNTY COURT", flanked by transomed one-light
windows with hood-moulds. The ground floor has large
double-transomed mullioned windows and the 1st floor has
similar single-transomed windows, all with Tudor-arched top
lights; the 3 attic gables have mullion-and-transom windows of
6, 4 and 6 lights. The canted corner has one-light windows in
each of its 3 sides matching the style of the other windows,
and its turret has an embattled parapet and steep octagonal
roof surmounted by an open cupola finished with a finial. The
5-bay left return (to King Street West) is in similar style
but the 1st 3 bays are a single large gabled composition with
a 2-storey canted bay window in the centre, and the 4th has a
very large multiple-light window to the raised ground floor.
INTERIOR not inspected.
The building forms a group with Magistrates Court building, to
which it is an extension.