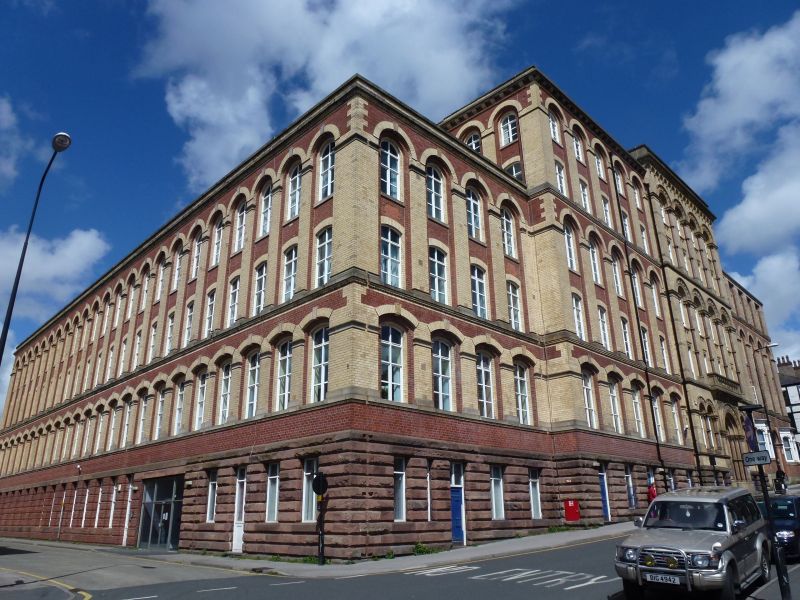 Clothing factory, now warehouse. 1871, by R Todd of Southport,
for Timothy Coop and James Marsden; with large additions of
1888, by Isitt and Verity, and 1892 by W Verity. Yellow and
red brick on rusticated sandstone basement (roof concealed but
probably asphalt). Very large rectangular block on corner
site. Italianate style.
EXTERIOR: 4 and 6 storeys, on a site which slopes down from
right to left: the 1871 portion to the right has 4 storeys
(apparently reduced from 5) and 5 bays; the 1888 portion in
the centre, breaking forwards slightly and itself in 2
portions, has 6 storeys including a basement, and 5:4 bays;
and the 1892 portion to the left, set back slightly, has 4
storeys including the basement, and 4 bays. The 1st build, to
the right, has the windows of the 1st and 2nd floors set in a
giant pilastered arcade of round-headed arches with keystones
(floors above this level probably formerly similar but the
topmost now missing), and the subsequent build to the left
continue this treatment at the same horizontal level (2nd and
3rd floors, because of the slope), while the 1888 build in the
centre repeats the same treatment at 4th and 5th floors. All
parts have yellow brick pilasters and corner pilasters; the
centre has bracketed cornices, and a balustraded parapet to
the 4-bay portion. The basement has square-headed windows;
otherwise, all the windows are segmental-headed except those
in the heads of the arcades which are round-headed. Main
entrance in 4-bay portion of the centre, in a large
round-headed archway moulded in 3 orders, and further
distinguished by a feature-balcony at 1st-floor level. Very
long left return of 1892 portion, 23 bays in style matching
front. Rear and INTERIOR not inspected.
HISTORY: established to employ girls redundant as a result of
the Cotton Famine of the 1860s.