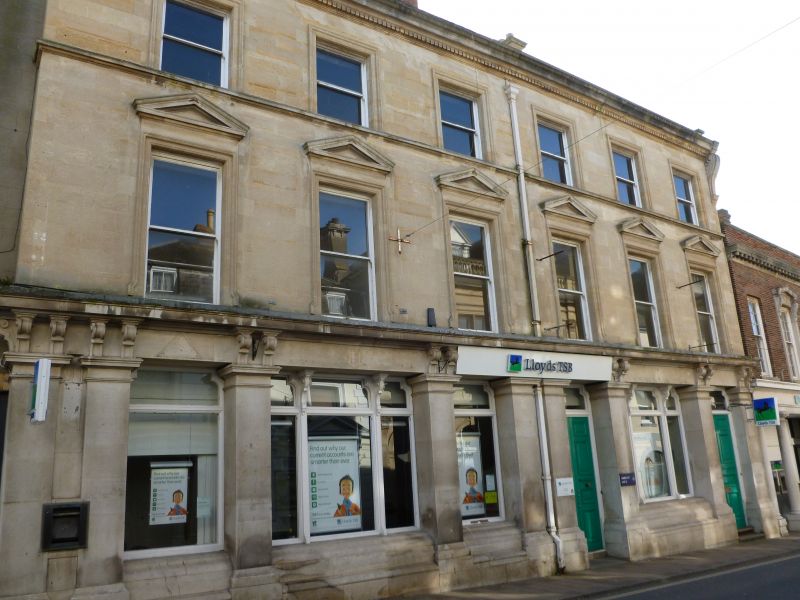 Bank. Probably c1887. Stone ashlar front; top of W side wall
is rendered and may be of brick, along with rest of building.
Roof covering not visible from street, but probably of slate.
2 red-brick chimneys on ridge, with stone caps designed as
entablatures. Probably a double-depth plan.
3 storeys with garret. 6-window range. Ground storey divided
into 6 bays by thick square columns, paired at the left-hand
end and in the centre. Bays mostly glazed and of equal width
except for a wider bay second from each end; 7-panelled door
in right-hand bay. Above the columns is an entablature with
paired brackets corresponding to each column. Upper storey
windows have moulded architraves, the taller 2nd-storey
windows with friezes and triangular pediments. Continued cills
in 3rd storey. Dentilled top cornice and blocking-course, the
former supported by a large console at the right-hand end. The
windows in all 3 storeys formerly had ornamental iron
guard-rails, those in the ground storey incorporating the
words BANK and FOX FOWLER & Co.
INTERIOR: not inspected, apart from banking hall, which seems
to have been wholly altered in late C20. Included for group
value.