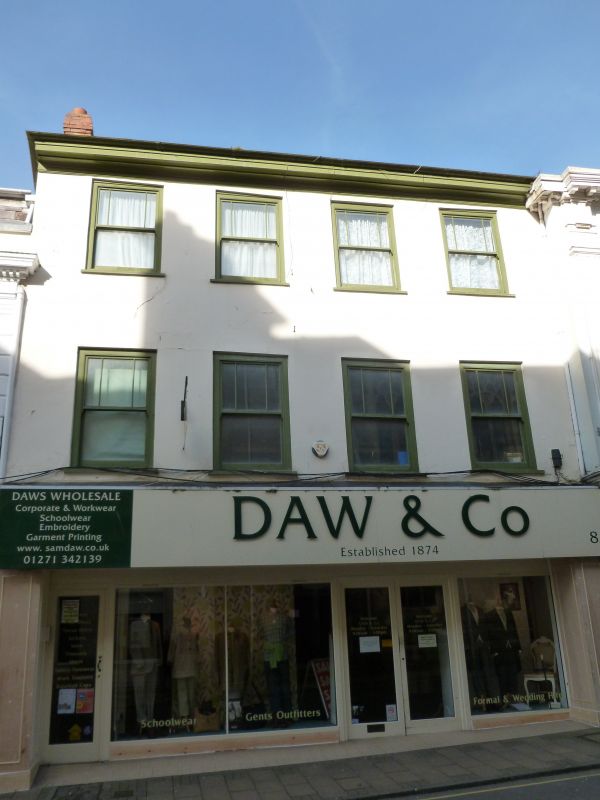 House and shop. c1635, remodelled externally early or mid C19.
Rendered front, probably of brick or timber-framing; rear wall
of stone rubble with segmental red brick window arches.
Structure of side walls uncertain, but front end of left side
wall is clear of brick in 3rd storey. Slated roofs; front
block has 2 roofs at right angles to street, hipped front and
back, the front hips linked to resemble a parallel roof. In
centre of right-hand roof, 4 original, diagonally set chimneys
of red brick. Late C19 or early C20 red brick chimney on left
side wall.
Wide-fronted, double-depth plan 1 room wide with gallery and
back block; front block with double chimney between front and
back rooms, dogleg staircase to left of back room. 2nd-floor
plan has 4 original rooms, 2 at the front with entrance lobby.
Ground-storey partitions removed and courtyard glazed over to
form deep shop through both blocks.
3 storeys; back block reduced to 1 storey. 4-window range.
Late C20 shop front in ground storey. Upper-storey windows
have sashes in recessed box-frames; in 2nd storey sashes have
horns and 2 upright glazing bars to each upper sash with
margin panes, in 3rd storey 6-paned sashes without horns.
Wooden eaves cornice.
INTERIOR: many original features. Ground storey has single-rib
ceiling and frieze in what was originally rear room of front
block. At rear of back block a painted limestone chimneypiece
removed from front block; Tudor arch with sunk spandrels, ogee
and ovolo mouldings, urn stops. Similar chimneypiece in
first-floor front room, but without the paint.
Rear first-floor room has another single rib ceiling with a
section of frieze in cupboard on right-hand (E side of
chimney-breast). Chamfered door-frames with scroll-stops at
entrances to gallery and staircase. Latter of wood with closed
strings, turned balusters and a high moulded handrail. Second
floor has original door-frames to all rooms, chamfered and
with scroll-stops as on the floor below.
A small lobby giving access to the 2 front doors with moulded
ribs; studded plank door to gallery. Right-hand (east) front
room has wooden bolection-moulded chimneypiece. Gallery has
wooden, 3-light window with ovolo-moulded mullions. Roof
timbers accessible only at rear left-hand side; trusses with
threaded purlins and ridge, collars pegged (not halved) high
up on faces of principal rafters.
HISTORICAL NOTE: the house was town property, leased to
Richard Harris the younger of Barnstaple, yeoman in 1634, on
condition that he rebuilt it within 5 years at a cost of »200.
Building probably started in 1635, since No.7 (qv) which was
rebuilt in that year, took in part of No.8's ground. The
freehold was sold off in 1921.
(Title deeds; North Devon Athenaeum: Borough Records, Lease
No.172).