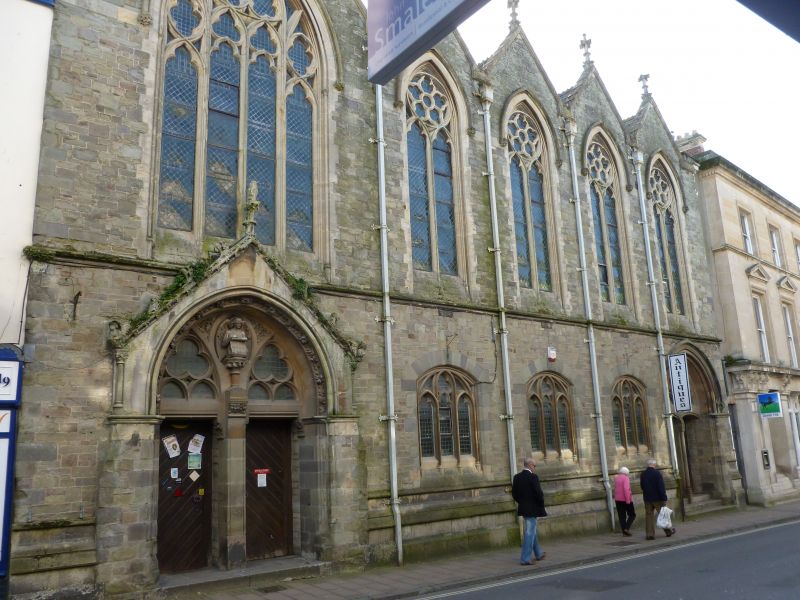 Congregational church. 1870. By RD Gould and Son, designed in
the `Middle Pointed Style'. Squared slatestone rubble with
detail in limestone and local stone; rear wall partly of red
brick. Slated roofs with red crested ridge tiles.
5-window range in 2 stages, with emphasis on the left-hand
bay. Ground storey has 3 small segmental-headed, traceried
windows flanked by a doorway at either end. Larger, left-hand
doorway has moulded, enriched 2-centred arch enclosed within a
steeply-pitched, gabled hood springing from short columns,
which in turn rest on moulded imposts; the hood is decorated
with crockets and a finial. The doorway is subdivided by a
pillar, upon which sits an angel bearing a scroll inscribed
`Holy, Holy, Holy is the Lord of Hosts'. Upper storey has
tall, pointed traceried windows, each one set under a gable.
Left-hand window is of 4 lights, the remainder 2 lights, these
4 windows also have finials on the gables above them. Rear
wall also contains traceried windows. INTERIOR: altered.
(Gardiner WF: Barnstaple, 1837-1897: 1897-: 99).