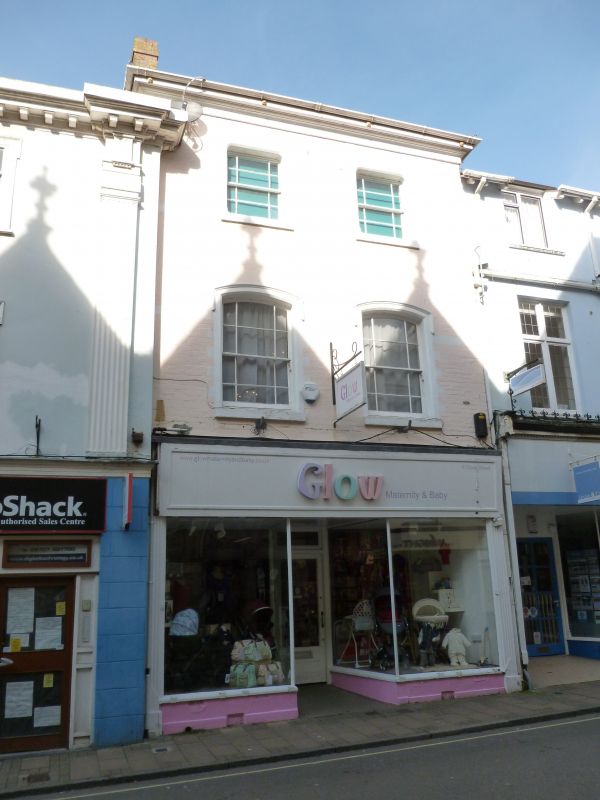 House and shop. Early C16, considerably rebuilt in C19; C20
addition at rear. Painted brick front with stone dressings;
rear wall, and probably much of side walls of stone rubble.
Hipped slated roof. Late C19 or early C20 red brick chimney on
One-room wide, 2-rooms deep plan with rear closet wing
projecting on right-hand side. Staircases between front and
back rooms and at front end of closet wing.
3 storeys. 2-window range of mid or late C19. Ground storey
has C20 shop front with fluted pilasters. Second storey has
segmental-headed windows with hoodmoulds; 3rd-storey windows
have flat heads with rounded top corners. All have 2-pane
sashes with marginal quarter-panes. Wooden eaves cornice with
gutter decorated with lion heads.
INTERIOR: ground floor combined into a single shop and
extended backwards. Former rear room (probably the hall) has
C16 limestone fireplace and piscina in left-hand side wall.
Fireplace has Tudor arch, quarter-round and hollow mouldings
with no visible stops; lower part of fire back is of slates on
edge, laid in herringbone pattern. Chimneybreast is of stone
rubble and incorporates a relieving arch. Piscina (a rare
feature probably made for the house) has a 2-centred,
trefoiled and cusped head with 3-leaf decoration in the
spandrels; ogee and hollow mouldings with an elaborate stop
surviving at the foot of the left side. Base, which contains a
basin and drain outlet, is carved with 4-leaf decoration along
the front. Both staircases are of wood, early or mid C19 with
thin, square-section balusters.
First-floor fireplaces, doors and cornices are of similar
date; marble chimneypiece in front room, wooden one with
attached columns in rear room. Early or mid C18 door on each
of ground and second floors. C19 king-post-and-ridge roof
structure. Several old barred sashes in rear wall. Although
the house has been much rebuilt, early features may still
survive concealed in the side wall and possibly in the floor
structures.
At the rear is a former warehouse (not included).
(Transactions of Devonshire Association: Everett AW: Domestic
Piscinas in Devon: 1958-: 127-8, PL 10.99).