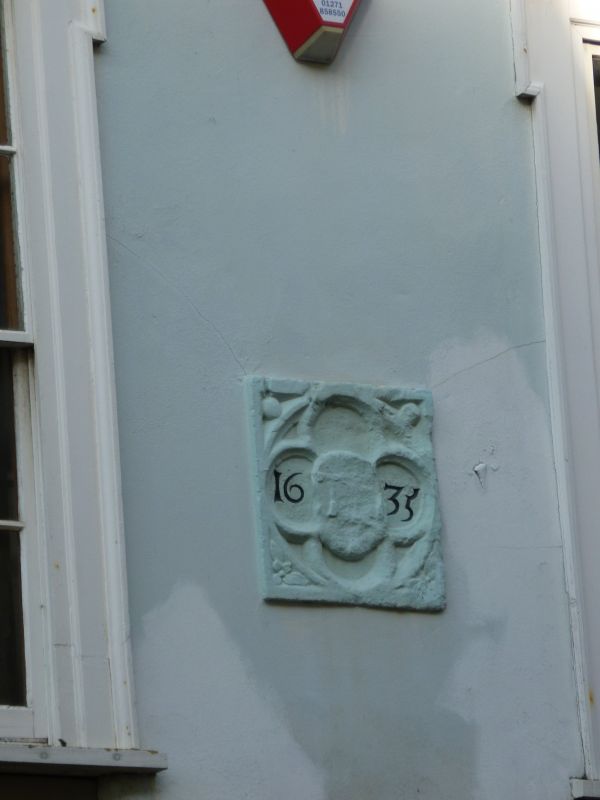 House and shop, now shop. 1635, remodelled early or mid C18
and later; late C20 addition at rear. Plastered walls of stone
and brick, possibly with some timber-framing. Hipped, slated
roofs at front ends of front and back blocks; remainder flat
roofed. No chimneys visible from street. Gallery and back
block plan; front block one room wide and 2 rooms deep, back
block one room deep.
Front block 3-storeyed with cellar beneath the rear part; back
block 2-storeyed. 2-window range, remodelled in early or mid
C18. Ground storey altered in late C20. Upper storey windows
have eared architraves with triple keyblocks; 6-pane sashes,
except that the upper sashes of the smaller 3rd-storey windows
have only 3 panes. Giant flanking Doric pilasters, fluted and
with a triglyphed section of entablature above each one;
modillioned eaves cornice across whole front, breaking forward
above the pilasters. Between the 2nd-storey windows is a stone
tablet carved with a quatrefoil and date 1635; in its centre
are the initials TH.
At rear the `gallery' (a 2-storeyed link building with closet
on top) is of brick in ground and 2nd storeys and has old
roughcast (possibly on a timber frame) above; barred sashes.
Front wall of back block covered with old roughcast, probably
on brick or timber-framing; barred sashes in ground storey.
INTERIOR: formerly had 2 early C17 broad-rib ceilings,
together with fireplaces and overmantels, on ground and first
floors. The fireplaces, overmantels and first-floor ceiling
are now at Stafford Barton, Dolton; ground-floor ceiling is in
the gatehouse at Shute Barton, east Devon. The ground storey
in front block has been heightened, and second floor totally
removed, both here and in the gallery. Nevertheless, features
of interest may still be hidden under plaster in the
partitions and outer walls, especially in the back block,
which seems to have avoided major structural alteration. The
roof structures, also of possible interest, are not easily
accessible.
HISTORICAL NOTE: the house was Corporation property, leased in
1634 to Thomas Horwood, merchant, founder of the Church Lane
almshouses, on preferential terms; he was to spend »200 within
5 years `in building...the said tenement'. A lease of 1648
describes the house as `lately reedified and new built'. An
agreement of 1635 shows that Horwood was then about to build a
gallery on the right-hand (eastern) boundary wall. Horwood
(d.1658) and his wife Alice appear to have lived in the house
until their deaths. The freehold was sold off for redemption
of Land Tax in 1916.