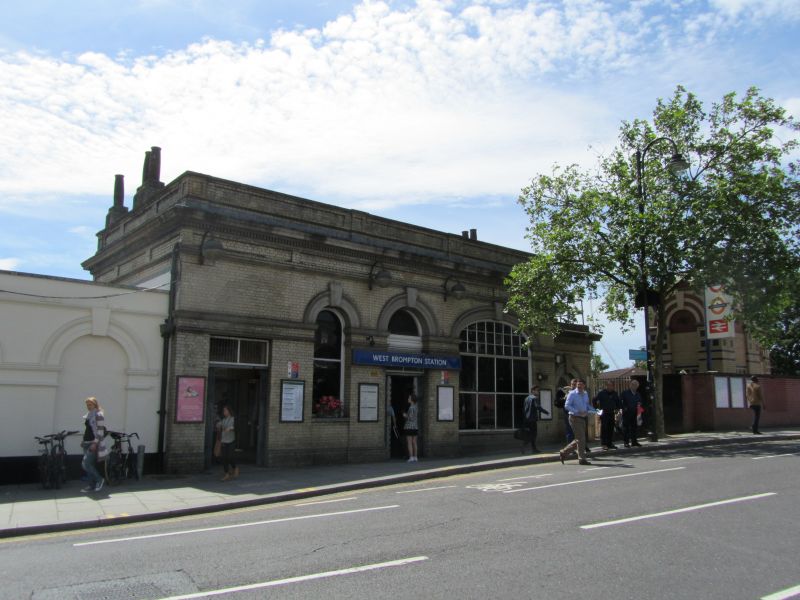 Underground station. Opened 12th April 1869 as an extension of the Metropolitan Railway and first District Line through trains ran on 1st August 1870. Designed by Sir John Fowler, engineer to both companies, in Classical style. Some alterations to Booking hall c1928 and refurbished c1990. Booking Hall is built of white Suffolk bricks with slate pavilion roof. Left side brick chimneystacks but tall original stacks replaced. together with original cresting. One storey , originally symmetrical with four round-headed arched windows with keystone linked by impost blocks flanking larger similar central door. In 1928 the former ladies' room on the right was rebuilt for retain space and the two right hand windows changed into a large window under segmental-headed arch with keystone. The lower part has been altered in the later C20. Left side retains one original window but the left window was later converted into a secondary entrance leaving the outline of the original arch visible. Panelled parapet, moulded cornice and panelled band below the cornice. Parapet originally had urn finials at the corners and ball finials to the centre. Originally there was also on each side a lower height porch with round-headed arch with central keystone but only the right hand one survives with blocked doorcase. Ticket hall refurbished in later C20. Rear wall on to train shed has five round-headed arches, three of which are blocked. Original train shed with brick blank arcaded retaining walls with round-headed arches with keystones and impost blocks, extending also along full length of one platform. Engine shed is about 66 feet long having 6 bays of brick arches at the sides and roof with 9 bays of segmental-headed iron trusses supporting wooden roof with central glazed lantern and wooden framed end clad in vertical planks and supported on a square wooden pier and pilaster on each side with moulded pendants. Angled roof appears to have been a prototype for the 1870s Earl's Court and Ealing Broadway stations. Twin cast iron footbridges for departing and arriving passengers both survive, although the exit footbridge is no longer linked with the street These have decorative balustrading, square newel posts and mahogany handrails and are supported on decorated cast iron columns. Cast iron bridges between with criss-cross design balustrading. Some late C20 brick infill below staircases.
One of a small number of 1860s underground stations which are the first in the world, West Brompton being unusual in retaining its original Booking Hall , although with some alterations. It is the best preserved example of a station on the District Line.