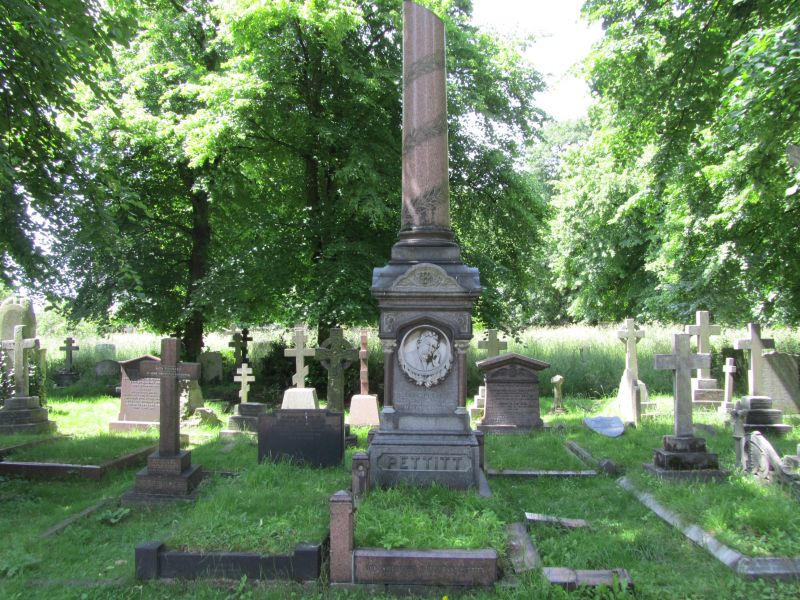 A pink granite broken column, with inscribed spiralling laurel leaf decoration on the shaft, standing on a square grey granite pedestal. The pedestal has a deep moulded cap with shaped pediments with the monogram HP surrounded by laurel leaves, and pink granite engaged colonnettes supporting four-centred arches. On the front face within the arched niche is a marble plaque bearing a bust in relief of Henry Pettitt in a pensive attitude. Below the plaque is an inscription reading: IN LOVING MEMORY OF/ HENRY PETTITT/ WHO DIED DECEMBER 24th 1893/ GREATLY MISSED AND DEEPLY MOURNED/ BY HIS WIDOW AND FAMILY/ AGED 45 YEARS. Other family members are commemorated in inscriptions in the other three niches. These are his mother, Lucy, née Hart (1825-1897; Annette, his wife (1847-1916) and Lillian Mary Lucy, his daughter (1879-1918). At the base of the pedestal the name Pettitt is carved in block letters in relief in an incised panel. The pedestal is surrounded by a pink granite kerb, extending around the grave plot, with six pyramid-capped marble posts joined by bronze cabled railings, some of which are missing.

Henry Alfred Pettitt (1848-1893) was a noted Victorian playwright of populist drama who wrote, or co-wrote, numerous melodramas and musical burlesques. His first play, 'Golden Fruit', was written in 1873 whilst he was an English master at North London Collegiate School, Camden Town; his last, 'The Life of Pleasure', was written in 1893 before his death from typhoid fever at The Chestnuts, 352 Goldhawk Road, London. He became hugely successful during his career: at one time 22 companies in England and six in America were touring with his plays, and he produced plays for Drury Lane and the Gaiety theatres amongst other West End playhouses.

* Design interest: an elaborate memorial with the added interest of a characterful marble portrait relief;
* Historic interest: commemorates Henry Alfred Pettitt, a prolific late-Victorian playwright, producer of many of the burlesques and melodramas that defined popular theatre in this era;
* Group value: it is located within the Grade I-registered Brompton Cemetery and has group value with other listed tombs and structures nearby.