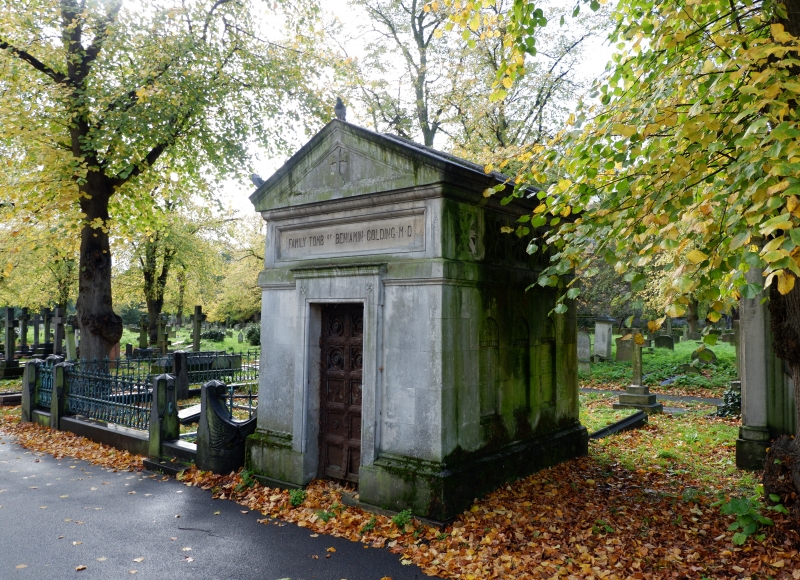 A small rectangular mausoleum in a Neoclassical/Early Christian style, facing the central avenue near the northern entrance to the cemetery. The main doorway has a raised surround bearing two carved rosettes, and contains a heavy iron door with rosette and scrollwork ornament. Above is a fielded inscription panel reading: 'Family Tomb of Benjamin Golding M.D.' The sides and rear display a series of tall shallow round-headed panels, each carved with a Maltese cross and a row of dentils, below which are inscriptions commemorating various members of the Golding family; Benjamin Golding's names him as 'the founder of the Charing Cross Hospital, London'. Above these is a frieze of square panels pierced with a design of two superimposed crosses. The two pediments each contain a simple design of a Calvary cross. The ridged roof is of stone.

Benjamin Golding (1793-1863) was a physician and teacher of medicine, responsible for the establishment of London's pioneering Charing Cross Hospital. He studied medicine at Edinburgh University and St Thomas's Hospital in London, graduating MD in 1813. He began offering free treatment to poor patients at his house in Westminster, and by 1823 had managed to secure financial and political backing to expand this service into a general infirmary serving the slum districts around Charing Cross. In 1831-4 a purpose-built hospital was established on a site north of the Strand. The new hospital incorporated a full medical school, the first of its kind in the capital, accredited by the new University of London. Golding continued to act as Director of both hospital and medical school until his retirement 1862. He died a year later and was buried in the family plot in Brompton Cemetery, where four of his nine children had already been laid to rest. In 1864 the family acquired a different plot and built the present mausoleum, to which Benjamin Golding's body and those of his sons were then transferred. In 1973 the Charing Cross Hospital moved out of central London to a site in Hammersmith about a mile to the west of the cemetery.

* Architectural: a good example of a mid-C19 Neo-classical mausoleum with interesting Early Christian decoration;
* Historical: commemorates Benjamin Golding, one of the major medical pioneers of C19 London;
* Group value: the tomb is located within the Grade I-registered Brompton Cemetery, adjoining the central avenue, and has group value with other listed tombs and structures nearby.