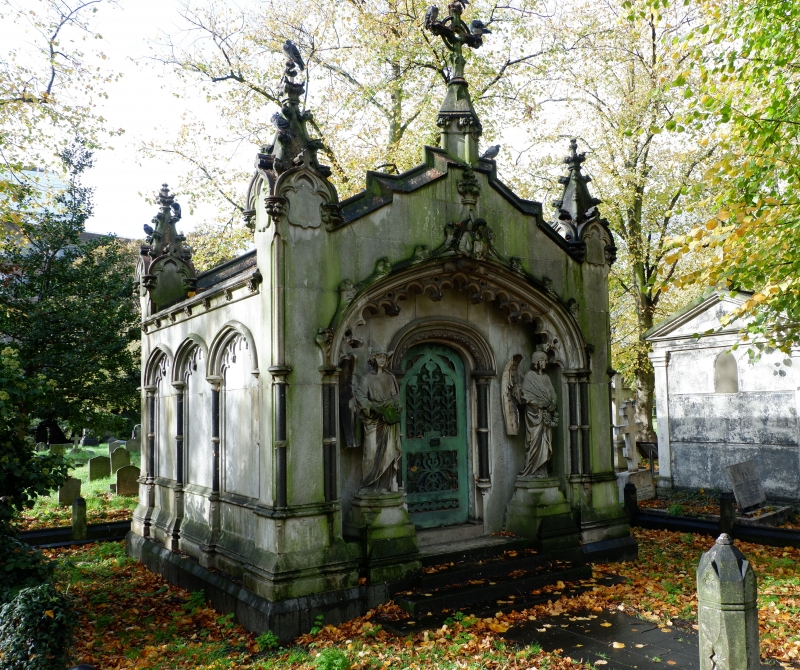 Carre [Caroline] Rule McDonald died in January 1900; her husband, a chairman of the Anglo-American Oil Company, arranged for her body to be temporarily placed in the catacombs at Brompton Cemetery until the completion of the present mausoleum in 1902. James McDonald died in Washington DC in 1915; the removal of his remains to London was delayed by the Great War, and he was eventually interred at Brompton in 1920.

Brompton Cemetery was one of the 'magnificent seven' privately-run burial grounds established in the 1830s and 1840s to relieve pressure on London's overcrowded churchyards. It was laid out in 1839-1844 to designs by the architect Benjamin B Baud, who devised a classical landscape of axial drives and vistas with rond-points at the intersections marked by mausolea or ornamental planting, the latter devised by Isaac Finnemore with advice from JC Loudon. The main Ceremonial Way culminates in a dramatic architectural ensemble recalling Bernini's piazza in front of St Peter's in Rome, with flanking colonnades curving outwards to form a Great Circle, closed at its southern end in a domed Anglican chapel (the planned Catholic and Nonconformist chapels were omitted for financial reasons) The cemetery, never a commercial success, was compulsorily purchased by the General Board of Health in the early 1850s, and has remained in state ownership ever since.

* Architectural: a large and elaborate mausoleum of high architectural quality in a sophisticated Flamboyant Gothic style;
* Artistic: good original sculpture and stained glass;
* Group value: located within the Grade I-registered Brompton Cemetery and has group value with other listed tombs and structures nearby.