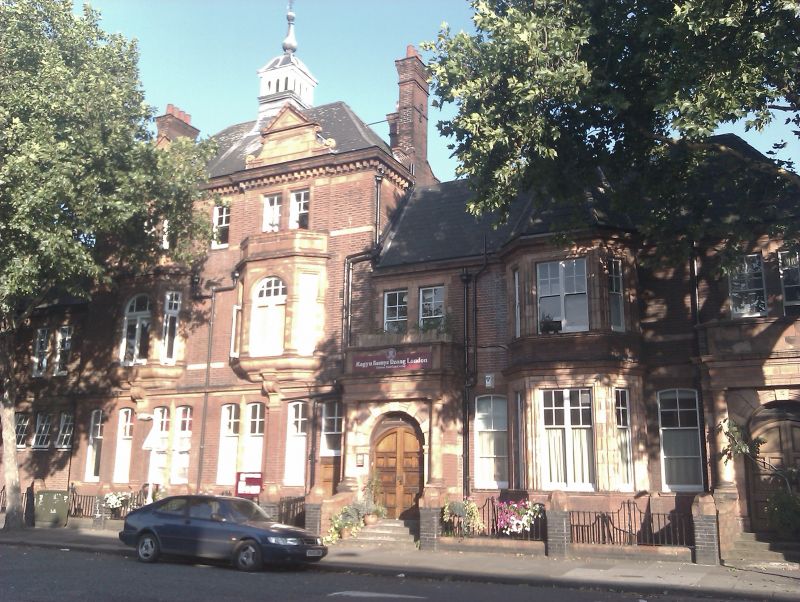 Baths, now storage depot and offices for the Borough's
Division of Public Works. Dated 1895 on a plaque in the main
stair hall. By EB I'Anson; Balaam Brothers, builders. For the
Parish of St Mary Newington, LJ Dunham was the parish clerk.
MATERIALS: brick in Flemish bond with terracotta dressings;
high hipped roofs of slate to centre block; clock tower with
convex mansard in metal; bathing hall roofs gabled with light
monitor clerestory to ridge.
PLAN AND EXTERIOR: centre block of offices: of 3 storeys and
2-window range; side wings of 2 storeys, 3 windows each. To
the left a four-stage clock tower of one-window range.
Single-storey shed further to the east, with facing gable in
centre and 10-window range in all; this part of the complex
housed the 2nd-class bath. Boiler to south-east corner of site
has a square base, broaching to battered octagonal stack which
finishes in a ring treated as blind arcading.
In plan, behind the range of offices fronting Manor Place, a
very large bathing hall, rectangular in plan, with gabled roof
and glazed light monitor on ridge axis; ten bays in extent,
the roof supported by thin metal trusses composed largely of
tension bars; the walls of white glazed brick; the gable ends
pierced by wheel windows with coloured glass in the pattern of
the Parish's arms. The original metal-fronted gallery has been
removed.
Single-storey shed by railway viaduct is also rectangular in
plan; converted to an employees' cafeteria; its interior and
that of the locker room to the south are of little
architectural merit, especially when measured against the
above-described great bathing hall, which is of exceptionally
broad span and length.
After the large bathing hall, the chief architectural interest
of the work is found on the Manor Place elevation: all
openings flat-arched unless stated otherwise.
Office block treated as a roughly symmetrical block,
asymmetrically composed from a variety of Arts and Crafts and
Flemish Renaissance elements: 4 pairs of camber-arched
openings to the ground floor; a pair of buttresses rises
through the ground floor to support a canted bay with
tripartite windows, that to the centre round-arched; the 2nd

floor is articulated as double, slightly projecting windows
alternating with single windows, the whole topped by an
entablature with dentil cornice. Above the eaves of the centre
block, each bay terminates in a Dutch scroll gable; on the
ridge a square cupola with finial. Tall stacks to returns.
The right-hand wing contains 2 round-arched entrances, in the
1st and 3rd bays, and between them a 2-storey canted bay
finishing in a high hipped roof.
The left wing's centre range projects on the ground floor to
support canted bay on console brackets. 3 camber-arched
windows to ground floor, on either side of bay range;
double-light window flanks the 1st-floor bay. Pair of
round-arched entrances with terracotta keystones to the left,
in the clock tower range; 1st-floor window above has a 2-light
window. Top stage of tower treated as a blind arcade with
corner pilasters and round-arched bell openings; clock face in
tympanum.
Easternmost wing has segmental-arched windows high in the wall
and narrow pilaster strips articulating the elevation into 3
parts, the centre of which is topped by a pediment. INTERIOR:
plain except for that of bathing hall already described. Only
feature of note the metal staircase in the main office block.
SUBSIDIARY FEATURES: attached walls, piers and railings.