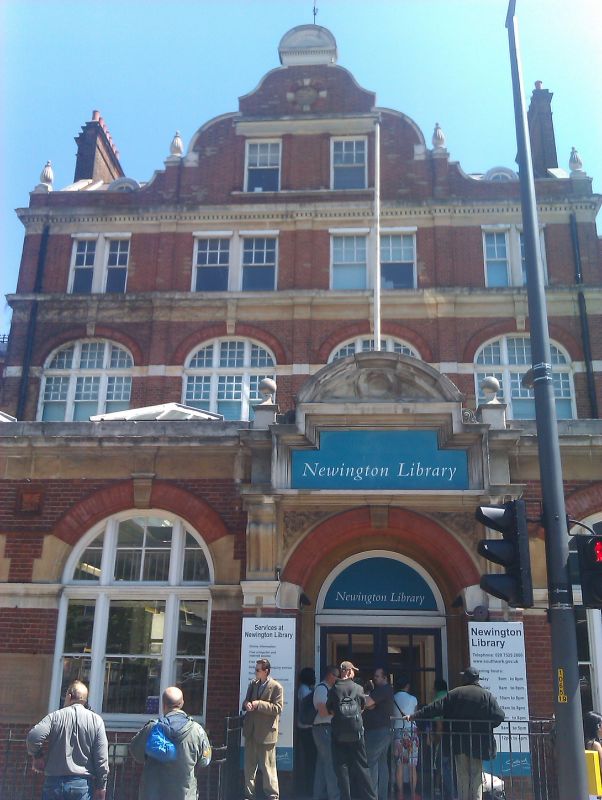 GV
II
Public library and museum. 1892-1893, museum 1902-1906. By architect Edward I'Anson; builder J Grover and Sons; constructed out of parish rates by a special vestry committee. The museum was the gift of Henry Syer Cuming, in memory of his father Richard.

EXTERIOR: library: four storeys over basement, stepping up to five in five over centre in scroll gable; four-window range; single-storey library wing and entrance projecting from facade to line of pavement, its roof parapeted. All openings to ground-floor projection round-arched, with the entrance in third-window range set under a gabled aedicule on scroll brackets, the entablature of which bears an inscription, "Newington Public Library". Stone entablature and parapet to single-storey projection. Stone springing band to these and all other windows.

First and second-floor windows to main elevation gathered together under two-storey basket arches; the former flat-arched, the latter round-arched; storey band between first and second floors, springing band to second floor; keystones of basket arches intersect entablature which forms a sill band to third-floor windows, which are flat-arched and doubled, those in the outer ranges slightly narrower than the pair in the centre. Each bay of the third floor separated by pilasters, and an entablature with dentil cornice above lintels. The centre bays continue above the parapet terminating in a Dutch scroll gable pierced by a pair of flat-arched windows, set in a three-bay Tuscan aedicule; small keyed roundel in the very peak of the gable. The bays are marked above the parapet by finials. Cupola on axis with gable; to either side of gable are roundel dormers. Clustered stacks to fire wall.

The exterior of the museum was not accessible.

INTERIOR: museum at rear of the complex, reached by a stair with handrail and balusters of original design, the ceiling to stair hall a half barrel vault supported by arched braces. Museum space is barrel-vaulted hall, the ceiling rebuilt; two storeys high, the long axis of which runs parallel to Walworth Road.
The Library and former Vestry Hall, Walworth Road (qv) form an important group.