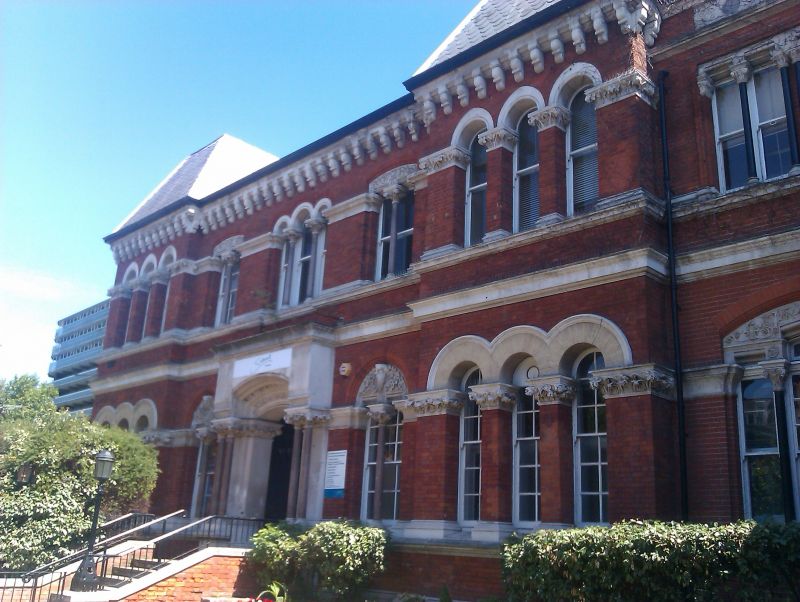 PLAN: two storeys over basement. Main elevation treated as pavilioned block with nine-window range; return of 1865 building, with 12-window range, consisting of the pavilion return, a recessed range of four windows and a slightly taller range of five windows; the c1900 rear extension, which has two storeys and an attic over a basement, has a five-window range, the end ranges treated as pavilions. To the right of the main entrance on Walworth Road is a two-storey annexe, of one-window range, in materials to match the original; this wing is not shown in mid C19 illustrations, and may date to the c1900 building scheme.

EXTERIOR: main elevation, symmetrical about a round-arched entrance set under a segmental-arched aedicule supported by a pair of coupled columns; to either side double flat-arched lights set in round-arched recesses, the tympana carved with foliage and heads; above the entrance a tripartite, round-arched window, and to either side double lights, as below, but set in segmental-arched recesses. The end pavilions have triple, round-arched windows on the ground and 1st floors, the former with broad, flush architraves, the latter with pointed architraves. Heavy corbel table to eaves. All the features on the elevation tied together by moulded sill, springing and floor bands. The springings of all openings treated as column capitals, carved in rich, naturalistic ornament. The annexe to the right repeats these motifs with some variations, especially in the parapet and round-arched dormer, which have an almost Jacobean air. The return elevation recalls the main elevation: an end pavilion at the corner and recessed range; there follows a somewhat taller, two-storey range, designed in an almost utilitarian style, with segmental-arched windows in a pilastrade to the ground floor, and flat-arched windows in an arcade above. Jogging forward from this range, is the range added in 1900. Its elevation is a mix of motifs found in the earlier building: double-lights in round-arched recesses, triple lights, and bravura naturalistic carving. Significant additions to the early formulae are an arcaded attic storey and a segmental-arched entrance in the right-hand pavilion; this entrance is supported by a pair of coupled
pilasters-cum-brackets which swell elegantly from bottom to top. The shape of these brackets is the only part of this design to indicate the later date. To either side of the main entrance are Gothic Revival lamp standards on stair walls; matching gates to entrance porch.

INTERIOR: generally very plain, with the exception of the council chamber, in the centre of the first floor. A new roof and ceiling have been installed, but in an inspection made several years ago, the original semicircular settles filling the chamber were seen to be extant, as well as the chairman's desk and iron spectators' gallery. The stair hall which is reached through the main entrance foyer is of some interest: lamp standards to the lower newels; wood banister terminating in floral scrolls; balusters of cast-iron in the pattern of Gothic plate tracery; the landing and first floor articulated as blind arcade, that to the south pierced by three stained-glass lights. Of note are the floor trusses holding up the first-floor landing and visible from below; the lattice interstices of these are treated as Gothic tracery.

The vestry hall to St Mary Newington is the second oldest of its kind surviving in London, the oldest being Woolwich Old Town Hall of 1842. The style is a subtle blend of French Second Empire and High Victorian Gothic, such as that found more commonly on commercial buildings of the period. The rear addition is an interesting and noteworthy example of a late Victorian architect matching a mid-Victorian design.

From 1900-1965 it served as the Town Hall for the Borough of Southwark; since 1965 it has housed municipal offices and the registry office. The architect, Jarvis, was District Surveyor and might have received the commission through this post.