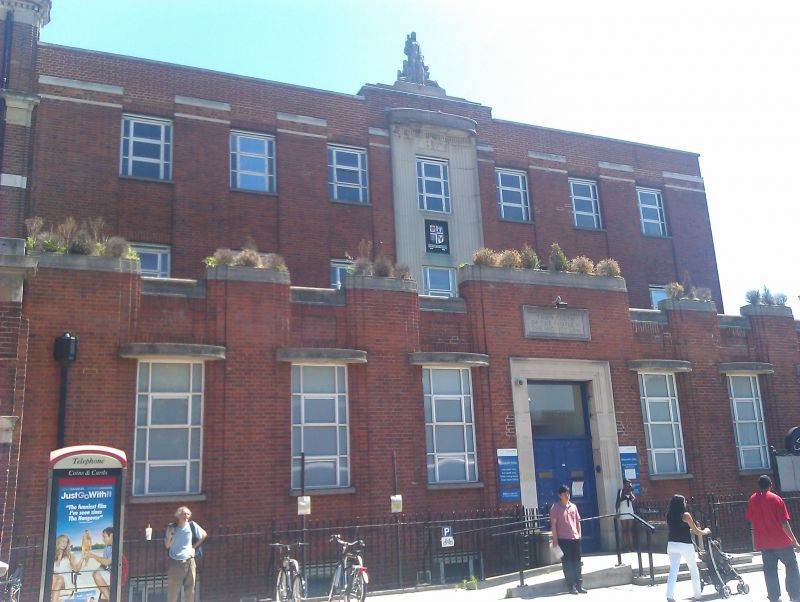 EXTERIOR: The Moderne-style building is constructed of red brick with artificial stone dressings and a flat asphalt-covered roof. The windows were originally steel but have been replaced in uPVC, albeit in designs that respect the original glazing bar patterns. The building has three storeys, with an advancing single-storey section on the Walworth Road elevation. This has a central doorway, originally with a semi-circular canopy, and classical stone surround. A plaque above the door bears the powerful maxim: 'The health of the people is the highest law', quoting Cicero's De Legibus 'Salus populi suprema est lex'. The windows here have subtly stepped-back brick reveals, plain sills, curving artificial stone lintels with fluting and blind brick panels above. The artificial stone coping contains inbuilt planters and so there is greenery along the parapet. The set-back upper storeys rise above, with the windows of each storey in a recessed plane. The central bay has a fluted artificial stone centrepiece, with a projecting, decorated, curved cornice bearing a date-stone. In between the windows here is the borough coat of arms. A photograph of the building dating to its opening shows it originally had an artificial stone parapet. This was presumably damaged in the Second World War, and has been rebuilt in brick, somewhat undermining the massing of the original design. The new parapet is slightly higher above the central bay and supports a statuary group (sculptor unknown), comprising a woman, holding a rod of Aesculapius, and three children, at various stages of childhood. The nude figures are allegorical (the woman holds the rod of Aesculapius, an ancient symbol of medicine and healing), yet the children have contemporary hairstyles and one holds a doll, which adds a sense of realism and poignancy.

The return to Larcom Street is composed of a three-storey section then, advancing slightly, a stair tower and beyond this an additional three-storey range, slightly set back as dictated by the orientation of the street. There are two entrances on Larcom Street, one with an original ramp for mothers with prams accessing the main clinic, and a separate entrance to the offices at the base of the stair tower. The former retains its original double doors, the latter its semi-circular canopy. The tall, square, stair tower has a long, vertical window and a centrepiece of fluted artificial stone, to the same design as that of the façade, and bearing the date 1937. Otherwise, the windows are arranged in long rows, the central apertures with continuous stone lintels. The rear elevation, not visible from the street, was always utilitarian in character and has modern fire escapes.

SUBSIDIARY FEATURES: The building is bounded by dwarf walls of artificial stone and cast iron railings.

INTERIOR: Considerably altered. The special interest is primarily external, however some original features survive, particularly in the clinic. The vestibule and waiting room area has original tile wall-cladding, albeit painted over, with a fluted cornice. In addition there is parquet flooring, some original panelled doors, terrazzo steps from the main entrance, ceiling mouldings, skylights, and a handsome wood plaque recording the Centre's opening ceremony in 1937.

In the offices, surviving features include: terrazzo stairwell with central lift cage and glazed tiles to dado level in cream, green and black; further tiles in some corridors; full-height tiling to two or three smaller rooms, presumably the original sterilising rooms mentioned in the SLP article; some timber and glass double doors to the corridors; panelled doors and architraves in some of the upper floor corridors; and one set of timber cubicle partitions.

HISTORY: The former Public Health Centre at Southwark was one of a series of pioneering health centres built at the end of the 1930s, in advance of the 1946 National Health Services Act which made their construction a duty of health authorities. Its foundation stone was laid on 11 July 1936 and the building opened on 25 September 1937.

The new building brought all the borough's health services under one roof and included a solarium for exposing children to artificial sunlight, a TB clinic, X-ray department, maternity and child welfare centre, dentist clinic, and the offices of the Medical Officer for Health and the Public Analyst, the latter complete with chemical and bacterial laboratory for testing foodstuffs. There was also a special clinic 'for women from 45 years of age who are subject to illness and disease peculiar to this age group'. With the opening of the health centre, Southwark became, 'the first borough to have the while of its health services in one building', it was claimed by the Borough Medical Officer, although a similar centre had opened in nearby Bermondsey a year earlier. The new health centre featured in several press articles in local newspapers, but also in the Times and the Daily Telegraph. The medical journal, The Lancet commented that, 'the borough council have wisely decided that the building shall have a pleasing appearance and by the brightness of its interiors give a cheery welcome, so that the inhabitants may be encouraged to make full use of an institution devoted to the improvement of their health'.

The South London Press, when the building opened in 1937, described the functions of the various parts of the Public Health Centre. The ground-floor served as a dispensary, maternity clinic, doctor's surgery, dentist's clinic, X-ray room, and solarium; the first-floor as offices of the Public Health Department; the second-floor as offices and laboratories for the Public Analyst and his staff; the basement contained records and storage space, a nurses' room and a Health Education Department room for showing public information films. Little survives in the surviving fabric to indicate these former functions, though these would not necessarily have required particular fittings or spatial arrangements. Photographs from the programme for the building's opening ceremony show a series of laboratories and clinics with tiled walls and parquet floors, most of which have since been removed.

REASONS FOR DESIGNATION: The Walworth Clinic, built in 1937 to designs of the Borough Engineer, Percy Smart is designated at Grade II for the following principal reasons:
* architecture: its external massing, jazzy, Deco-style detailing and good quality materials and craftsmanship (the interior is considerably altered);
* symbolism: a plaque on the building's facade bears a powerful quotation from Cicero and the sculptural group is a striking emblem of the centre's focus on mothers and children in what was a deprived part of London in the interwar years;
* historic interest: a health centre built before the founding of the NHS in 1948, which prefigures its integrated, cradle-to-grave ethos;
* group value with neighbouring municipal buildings, the former Town Hall (1864-65) and Newington Library (1892-1893), both listed Grade II.

The Walworth Clinic, built in 1937 to designs of the Borough Engineer, Percy Smart is designated at Grade II for the following principal reasons:
* architecture: its external massing, jazzy, Deco-style detailing and good quality materials and craftsmanship (the interior is considerably altered);
symbolism: a plaque on the building's facade bears a powerful quotation from Cicero and the sculptural group is a striking emblem of the centre's focus on mothers and children in what was a deprived part of London in the interwar years;
* historic interest: a health centre built before the founding of the NHS in 1948, which prefigures its integrated, cradle-to-grave ethos;
group value with neighbouring municipal buildings, the former Town Hall (1864-65) and Newington Library (1892-93), both listed Grade II.