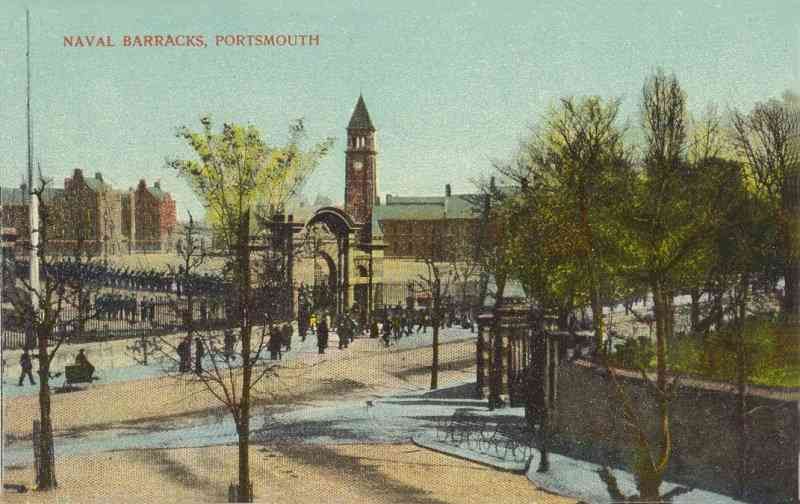 Formerly known as: Anglesey Barracks QUEEN STREET.
Army barracks, now naval barracks. 1847-48, altered mid C20.
Red brick in Flemish bond with ashlar dressings. Concealed
roof, with brick stacks.
EXTERIOR: 3 storeys. 3;16 window range. Originally forming the
centrepiece and right-hand wing of a longer range. Ashlar
plinth, 1st-floor band, and eaves cornice below
concrete-rendered parapet. 12-pane sashes in reveals with flat
gauged brick arches and stone sills. Double board doors with
4-pane overlights, each in ashlar architrave with piers,
frieze, cornice and blocking course, which runs into the
1st-floor band. Above each door a tripartite window with
wooden mullions and windows of 4, 12 and 4-panes. Former
centrepiece projects below pediment with oculus and above, a
console-bracketed plinth which formerly supported the statue
of a lion (now in Wardroom garden, qv).
Wing: 2 left and 3 right bays project slightly; 2 entrances.
Rear ground-floor iron Doric colonnade broken by two C20
3-storey, 2-bay projections. At left corner inverted cannon
barrel bollard.
INTERIOR: entrances lead into stairhalls from which rise stone
stairs with stick balusters.
HISTORY: the barracks were originally part of the army's
Anglesea Barracks and were incorporated into the first naval
barracks HMS Victory in 1899. An interesting example of a
large mid C19 barracks, and one of the few that remain from
immediately before the Crimean War.
(Lloyd DW: Buildings of Portsmouth and its environs:
Portsmouth: 1974-: 82).