Numbers 44 and 46 Benella and Attached Railings 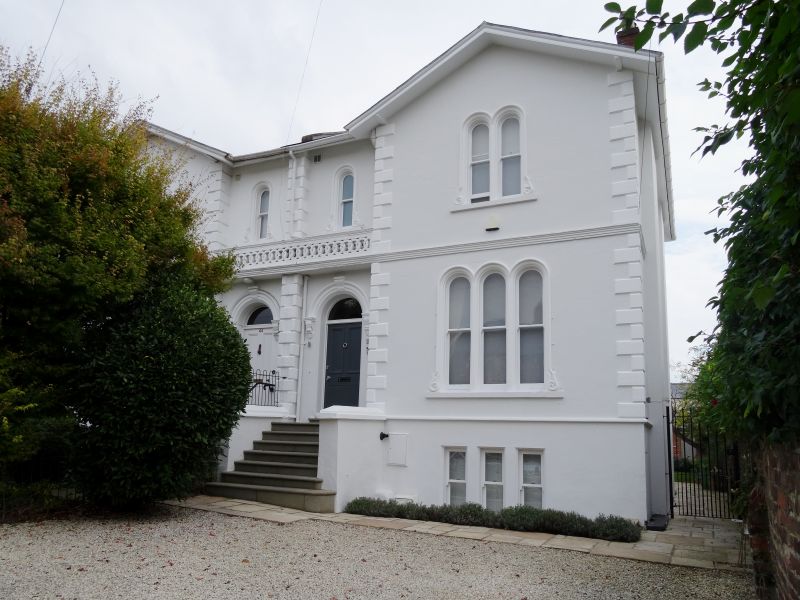 Pair of semi-detached villas and attached railings. c1830-50.
Stucco over brick with slate roof and brick end stacks; iron
railings. Regency Gothic style.
EXTERIOR: 2 storeys on basement, 4 first-floor windows. The
outer bays are wider, gabled and break forwards. Stucco
detailing includes quoins to angles and to raised party-wall;
ground-floor band, moulded first-floor band surmounted to
centre by balustrade with concentric circle motif; windows
have roll-moulded architraves ending in lower scroll. First
floor has outer pairs of 1/1 round-arched horned sashes with
similar single windows between; ground floor has similar
triple windows. Flights of steps to central entrances with
3-panel doors and fanlights, tooled arches over on acanthus
corbels and with keystones. Low coped walls to either side of
steps. Basements have three 1/1 sashes with chamfered mullions
between.
INTERIOR: to No.46 has dogleg staircase with lion's paw to
newel. Original joinery includes 4-panel doors and dividing
doors. Original plasterwork including moulded cornices. No.44
noted as retaining similar interior features.
SUBSIDIARY FEATURES: arrowhead railings to dividing boundary.
HISTORICAL NOTE: No.46 has been know as Benella since it was
built.
Forms a pair with Nos 48 and 50 (qv); a similar design to Nos
7 and 8 Montpellier Grove (qv).