Numbers 15 and 17 and Attached Area Railings 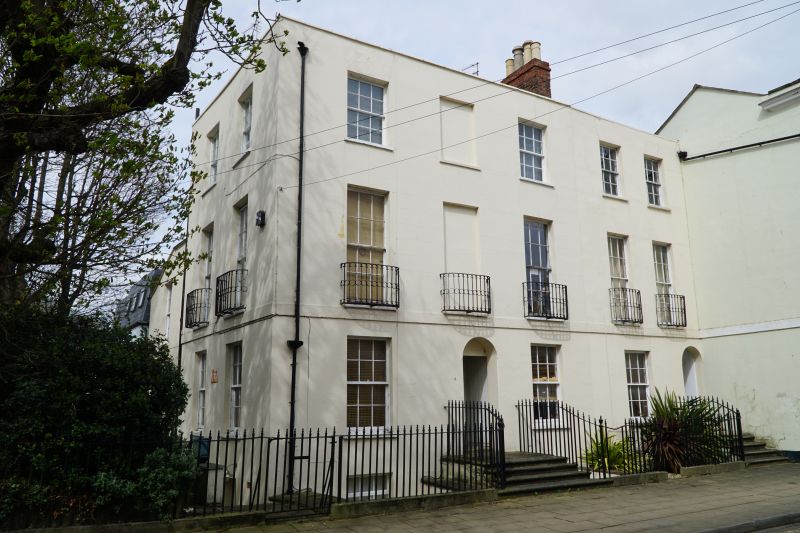 2 terraced houses and attached railings. c1805-20 with later
additions and alterations including some C20 ranges to rear.
Stucco over brick with concealed roof and tall brick
party-wall stack; iron railings and balconies.
EXTERIOR: 2 storeys on basement, 5 first-floor windows (3:2)
with 2-storey service ranges to rear. 6/6 sashes, taller to
first floor, the central openings to left house are blind; all
in plain reveals and with sills. Basement has casement
windows. Entrances: flights of 4 roll-edged steps to central
and right entrances, 4-panel, part-glazed door with overlight
and renewed door, with fanlights in round-arched reveals. Left
return: 2 first-floor windows: 6/6 sashes throughout. Left
return has 3-storey, 2-window range, then 2-storey, 1-window
range: 6/6 sashes.
INTERIOR: not inspected.
SUBSIDIARY FEATURES: individual balconies to first-floor
windows, also on left return, have embellished rod and central
circle motif also found on Nos 11, 27, 31, 33 and 37 (qqv);
area railings have twist-head and urn finials to stanchions.
HISTORICAL NOTE: building along St George's Place commenced in
1805; originally known as Stills Lane, it was the only road
connecting the High Street with the Royal Well Spa before the
Promenade.
Abuts No.11 (qv).
(Chatwin A: Cheltenham's Ornamental Ironwork: Cheltenham:
1975-1984: 19).