Numbers 16 and 18 and Attached Area Railings 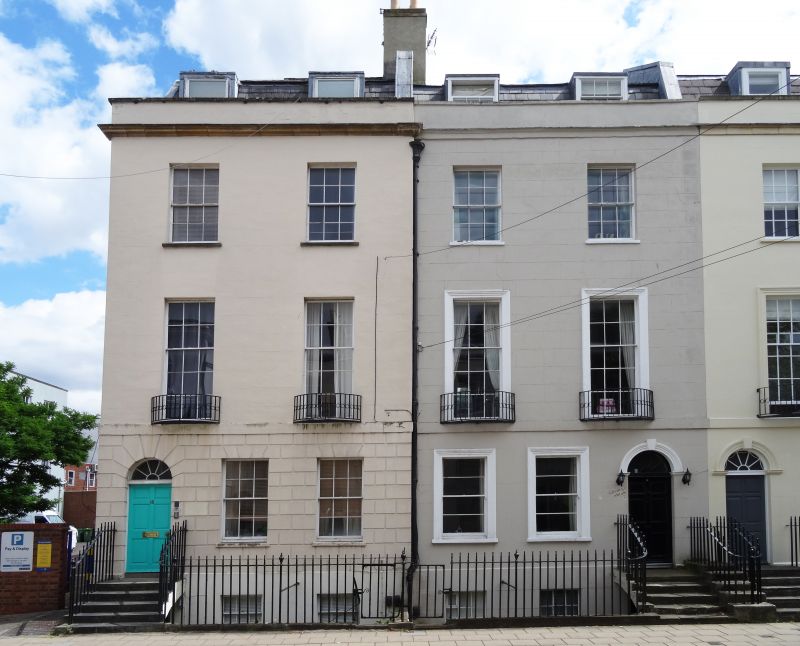 Pair of terrace houses and attached area railings. 1788-9.
Stucco over brick and pinkish-brown brick with mansard slate
roof and stucco ridge stacks; wrought-iron railings and
balconies.
EXTERIOR: 3 storeys on basement and with attics, 4 first-floor
windows (2:2), extensions to rear, right. Left house projects
slightly. Stucco detailing includes rusticated ground floor to
left, drawn into voussoirs over openings; ground and first
floor windows to right have tooled architraves. Mainly 6/6
sashes, except to ground-floor at right are 2/2
horizontal-pane sashes and 6/9 sashes to first floor, all in
plain reveals and with sills. Attics have casements and 3/3
sashes; basements have 3/6 sashes where original. Entrances to
left and right: flights of steps to 6-fielded-panel doors with
fanlights with radial glazing bars, tooled head to right and
keystone. Rear retains 8/8 sashes.
INTERIOR: retain original joinery including panelled shutters,
4-panel doors and (to right) a narrow-open-well staircase with
stick balusters; otherwise not inspected.
SUBSIDIARY FEATURES: area railings have shaped heads, and some
arrowhead, with urn finials to stanchions. Individual
first-floor elliptical window boxes have rod and central
circle motif, similar to those on Nos 11, 15, 17, 27, 31, 33
and 37 (qqv).
HISTORICAL NOTE: Col Riddell (c1800-36), a famous Regency
quack doctor, lived at No.16. Cheltenham's famous Dr Jenner
lived at No.22 between 1805-22 (since demolished). Originally
part of a symmetrical terrace of 4 (2 now destroyed) called St
George's Place, they gave their name eventually to the whole
street, which was formerly known as Stills Lane. This is the
earliest terrace of houses in the street and the earliest
terrace in Cheltenham. Stills Lane was the only road
connecting the High Street with the Royal Well Spa before the
Promenade.
(Chatwin A: Cheltenham's Ornamental Ironwork: Cheltenham:
1975-1984: 19).