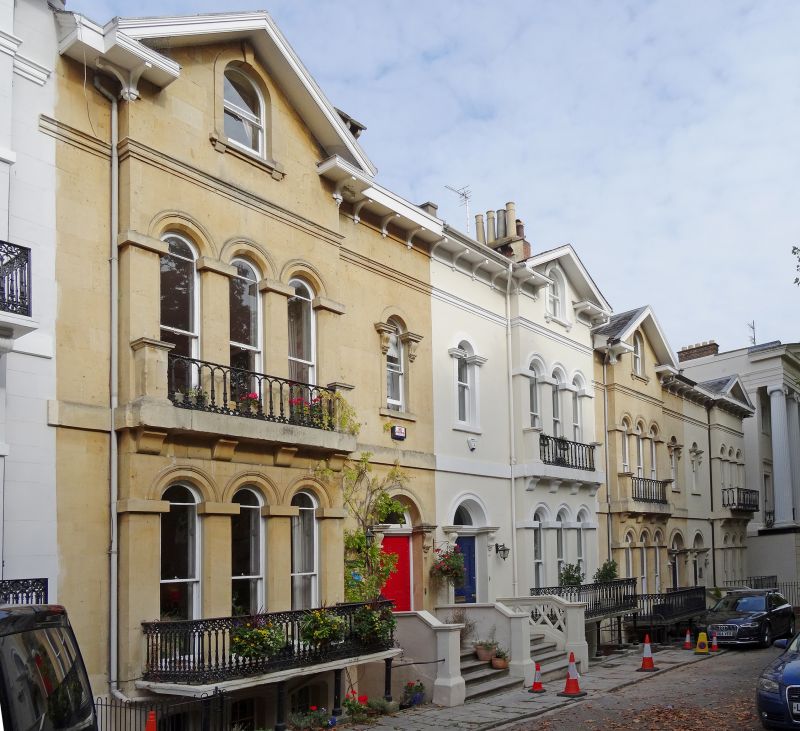 Terrace of 15 houses in pairs, now houses, flats and hotel.
Numbered right to left, described left to right. c1848-53.
Ashlar (mostly painted) over brick with slate roofs and
triangular capped and bracketed party-wall stacks; iron
balconies. Double-depth plan with side staircases alternately
right and left, forming pairs of houses with outer open
pedimented breakforwards; full-height ranges to rear.
EXTERIOR: 2 storeys with attics to pediments, 2 bays each (1 +
triple windows). Italianate style. Band over ground floor,
moulded string over first floor, wide bracketed eaves.
Round-arched windows throughout with 1/1 horned sashes, those
to ground and first floors of breakforwards are triple windows
with imposts and continuous moulding to head, with (to first
floor) continuous sills on brackets and end pillars for
railings (forming balustrade). Windows to No.75 have blind
boxes. No.87 has canted bay to ground floor. Basements have
4/4, 3/3 and 3/6 sashes. Attics to pediment (one window in
each) have tooled surrounds and sills on feet. Doors and
windows above have round-arched architraves and imposts on
corbel brackets. Central paired arched doorways with studded
2- and 4-panel doors and plain fanlights. Stone balustraded
steps up to doors. Segment-headed basement windows. No.87 is
not paired. Some inserted roof dormers. Rear retains 6/6
sashes.
INTERIOR: retain original joinery including panelled shutters
to windows; No.83 has dogleg staircase with stick balusters
and wreathed handrail, plasterwork includes cornice to hall
with acanthus modillions; otherwise not inspected.
SUBSIDIARY FEATURES: balconies to ground and first floors have
mainly round-arched arcades; to No.87, Greek key pattern; to
Nos 75 and 77 have ornate motif with circle.
HISTORICAL NOTE: formerly called York Terrace.
(Chatwin A: Cheltenham's Ornamental Ironwork: Cheltenham:
1975-1984: 36).