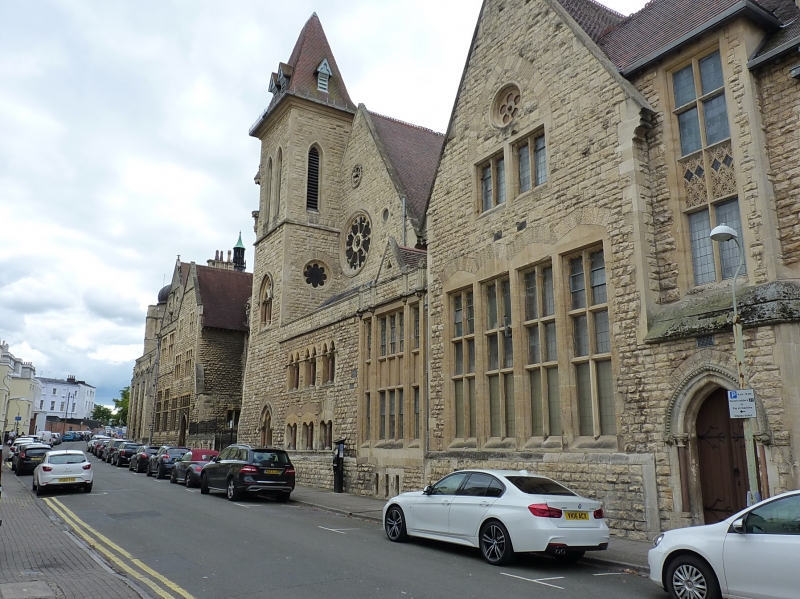 Left return (to Montpellier Street). Mainly 2 storeys, some
attics to gables, and 3-stage tower with tile spire. Mainly
3-light mullion and transom windows, the upper lights cusped,
windows to first floor are stepped, those to ground-floor are
straight-headed. Off-centre tower has pointed openings in
moulded surrounds and plank door. To south of Robson block is
a single-storey hall which has buttressed elevation with
dentil cornice and mullion windows, with dormers and louvred
pyramidal-roofed ventilators, facing east.
INTERIOR: noted as retaining original plasterwork, woodwork
and stained glass.
SUBSIDIARY FEATURES: abutting entrance are railings on low
chamfered walls have alternate sword handle finials with 2
pedestrian gates to right and left of main entrance and
further pedestrian entrance in wall at left between piers with
off-sets and cross-gabled and peaked caps. Railings continue
to left return with 2 further piers.
HISTORICAL NOTE: the school moved to this site in the 1870s.
Walls abut Railings and Gatepiers to Fauconberg House, St
George's Road (qv).
A large, late Victorian school complex, the evolution of which
can be clearly read in the structure, but which is
architecturally most notable for the earlier parts by
Middleton and Prothero; the other elevations form a
significant and familiar feature of the streetscape.
(The Buildings of England: Verey D: Gloucestershire: The Vale
and The Forest of Dean: London: 1970-: 136; Illustrated Guide
to the Cheltenham Ladies' College: 1931-).