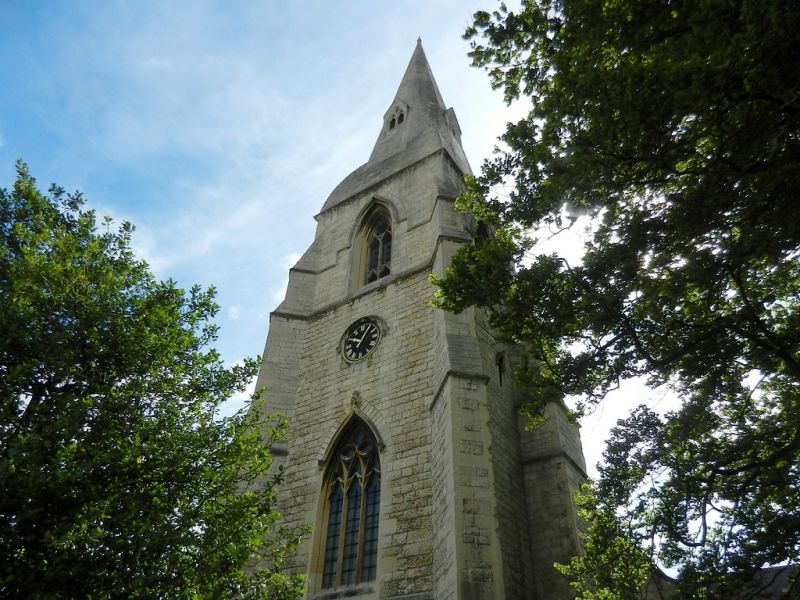 Church. 1853-54. By Frederick W Ordish of London. Promoter,
the Rev Close; partly intended for schoolboys from nearby
Cheltenham College. Cost »5,738. Chancel enlarged 1866 by John
Middleton. Interior carvings probably by Boultons of
Cheltenham. Drilled Cotswold stone with ashlar quoins and
dressings and with plain tile roof. Middle Pointed style.
PLAN: cruciform, with west tower; 4-bay aisled nave with
clerestory and south porch, crossing with north and south
transepts, 4-bay chancel with south lady chapel, north vestry,
west tower has heavily broached spire.
EXTERIOR: chamfered plinth; diagonal offset buttresses. South
porch: pointed doorway has plank doors in triple-chamfer to
head with hollow and roll moulding. Aisles have 3-light
windows in 4-centre arched surrounds with Decorative-type
tracery to heads ('highly original, unorthodox, and
complicated tracery, each one different', Verey). Clerestory
windows are quatrefoils in circle. Further entrance to west
end at base of tower: pointed doorway with 4 orders of arches
to head with hollow and roll moulding and hoodmould on foliate
stops. Above a tall 3-light windows with Decorated-type
tracery to pointed head, hoodmould with face stops; clock to
west side; upper stage has 2-light pointed belfry openings on
continuous sill band and with impost band; lucarnes to spire.
Similar 3-light windows to transepts and to chancel with
5-light east window, hoodmould; Lady Chapel has lancet lights
to side and 3-light window to east, similar to vestry at
north.
INTERIOR: nave has double-chamfered pointed arches on
alternate octagonal and 4-columnar piers with wider octagonal
piers to crossing, double-chamfered pointed arches to tower
and side chapels, similar arches to transepts on 1/2 octagonal
pillars. Double chamfered chancel arch with ovolo moulding
hollow-moulded hood on corbels carved with figures and
foliage. Tower has wooden screen and double doors with stained
glass cusped lancets; gallery over. Chancel (enlarged and
enhanced by Middleton) has arcade of 3 pointed openings with

double-chamfered heads. Chancel windows have black marble
columns and moulding to head, hollow-moulded hoodmould with
headstops. East end ornately carved with outer lozenges with
foliate infill and septfoil panels with lily, primrose, lily
of the valley etc. Above a frieze with inlaid decoration of
coloured stone. Around altar an arcade with finials and
pinnacles and mosaic panels within with symbols of the 4
Evangelists, on black marble plinth, and incorporating sedilia
(to south) and piscina (to north); angles playing instruments
to arches. Capitals have foliate decoration. Behind altar an
arcade on coloured marble plinth and 'banner' inscribed 'Do
this often in remembrance of me', cusped panels have faces in
relief of 4 Evangelists with Christ to centre. Scissor roof on
corbel faces, to nave and transepts; panelled roof to chancel.
South transept has wrought-ironwork screen brought from St
John's Church (since demolished); altar rail has ornate
scrolled 'balusters'. Octagonal font with symbols of the
Apostles on black marble pillars and with oak cover.
Coalbrookedale tiled floor throughout. Octagonal oak pulpit
with perpendicular-type decoration. Pine pews.
HISTORICAL NOTE: interior carving has similarities with that
of Church of the Holy Apostles, London Road, Charlton Kings
(qv), known to be by Boultons.
A complex roofscape that enhances the exterior appearance and
interest of the exterior. Standing as it does in the middle of
a small square, the church makes an important contribution to
the townscape of the area. Notable for the variety and
richness of its exterior tracery.
(Sampson A and Blake S: A Cheltenham Companion: Cheltenham:
1993-: 115; Blake S: Cheltenham's Churches and Chapels AD
773-1883: Cheltenham: 1979-: 31-32; The Buildings of England:
Verey D: Gloucestershire: The Vale and The Forest of Dean:
London: 1970-: 129; Sladen T: Notes: 1995-).