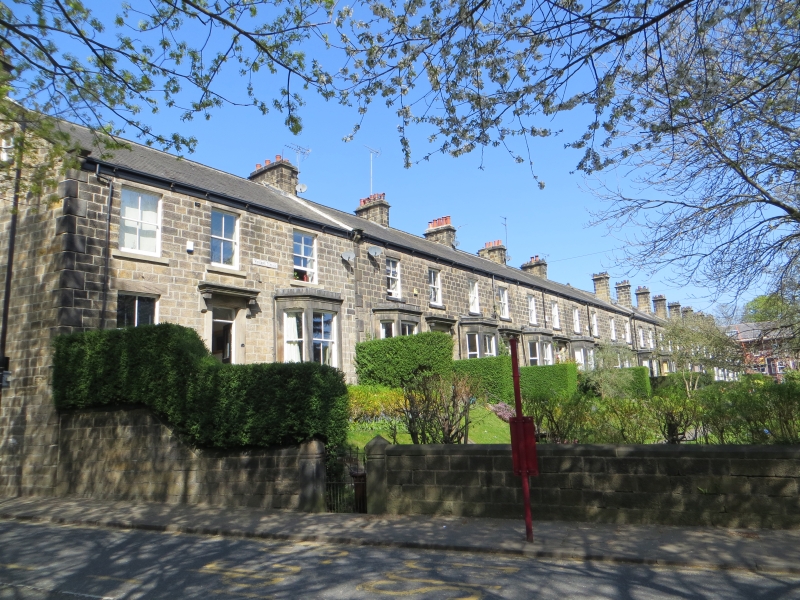 Terrace of 14 houses. Built in 1867-70, 1874-5 and 1886 for John Wood a local speculative builder. Coursed gritstone with ashlar dressings and Welsh slate roofs with 14 tall stone chimney stacks. 2 storey.
Nos 1 to 8 are defined by raised quoins at either end. Each house has a segmental arched doorway to right with ashlar surround topped with a bracketed hood. Part glazed 4-panel doors with plain overlights. To left each house has a canted stone bay window with plain sashes, and above two plain sashes. All windows have segment arched heads.
Nos. 9 to 13 have identical door surrounds and doors, and similar canted bay windows with flat heads. Two sashes above also have flat heads.
No. 14 has a central doorway with similar surround and canted bay window to left and a single palin sash to left, above 3 similar plain sashes.
Each house has a set of steps before the front doors which increase as the ground level drops to the south, No. 1 has two steps and No. 14 has twelve steps, Nos. 5 to 14 have iron balustrades to these steps.
INTERIORS of Nos. 7, 11 and 14 retain almost all their original internal features and most of the other houses are reputed to retain similar original features. These include original doors, skirting boards, picture rails, plaster coving and ceiling roses and fireplaces. Original staircases also survive in all these houses.