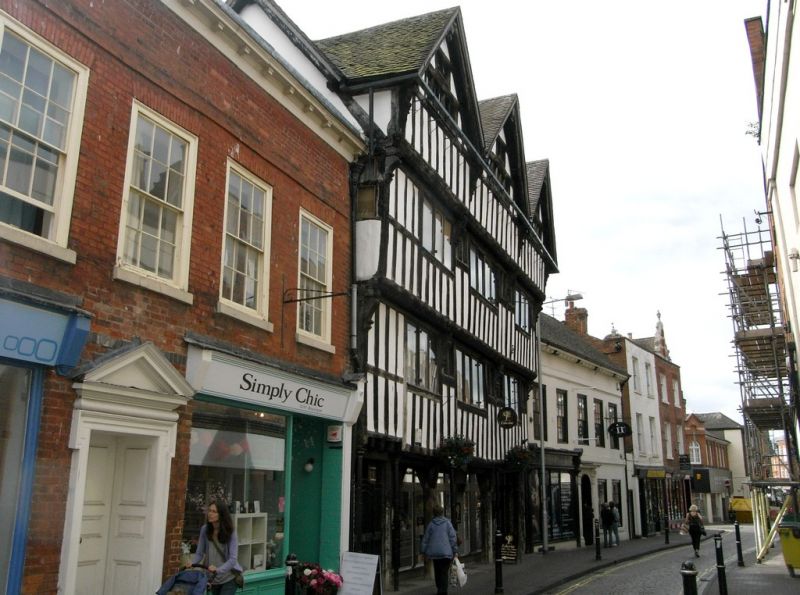 House. 1605 for the Nash family with later additions and
alterations including those c1674 and C20 restorations. Timber
frame with plain tile roof; 3 diamond brick stacks to rear.
Close studded with jetties to each storey; panels of square
framing to rear.
EXTERIOR: 4 storeys, 3 bays with 3 gables to street. Ground
floor has renewed doors at right and left, a board and a glazed
door; 4 chamfered posts with renewed jowels and 5
column-cluster stanchions. Bressumer beams with double-ovolo
moulding (renewed in parts). Each jetty on corbel brackets.
Mainly renewed casement windows but retaining 4 small 2-light
windows to first and second floors with ovolo-moulded mullions.
INTERIOR: chamfered spine beams ogee stops to ground floor,
arch braces to ground floor. Upper stages retain square panels
of timber framing. Roof has butted and trenched purlins with
splayed scarf joints, slightly joggled and bridled.
HISTORICAL NOTE: the house was in the process of being built
when Richard Nash died in 1605. He left it to his son, John
Nash (later alderman and noted Worcester benefactor), he lived
at Nos 5 and 6 (qv) but left Nash House to his to his kinsman,
Richard Nash of Droitwich. Richard moved into the house in 1674
and made alterations, adding 2 new chimneys and coach access.
He also probably gave the house its name. John Hughes,
Alderman, purchased the house in 1689.
Nash House and Greyfriars (qv) both have a frieze of scrollwork
dragons and sheaf-like motif.
(Molyneux N, Hughes P, Price P: Vernacular Architecture Group
Spring Conference Programme: 1995-: 2.8; Hughes P: Buildings
and the Building Trade in Worcester 1540-1650: PhD thesis:
1990-: 164, 184, 440).