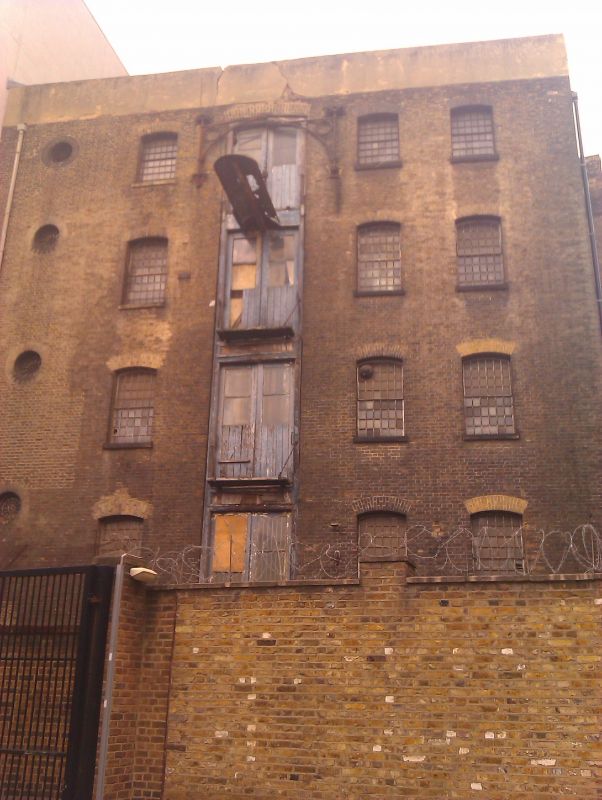 EXTERIOR: the stock brick building has four storeys plus raised basement and attic with a hipped slate roof, the latter concealed by a concrete rendered parapet. The five bay western elevation to Great Suffolk Street has central loading bays, all with their original timber doors, and a regular pattern of segmental-headed windows with metal glazing bars. The other elevation, to the rear, is almost identical but the southernmost bay has round-windows and a door at ground floor level; these light the staircase. There are three surviving iron hoists with decorative spandrels, two serving the eastern loading bays and one the western. The building abuts neighbouring properties to the south and is blind to the north, where there is also a chimney shaft which, curiously, does not relate to any openings in the building.

INTERIOR: the timber staircase with plain handrail and crossed balustrade in the south-eastern corner of the building provides access to each of the floors. The timber floors are supported by a grid of twelve simple cast iron columns which decrease in girth on the upper floors and timber beams. Trap doors feature near the western loading bays, allowing goods to be moved from one floor to another. There are later partitions on the basement, ground and first floors but the spaces here and on the remaining floors are readable as open storage areas. The queen post roof survives.

HISTORY: The warehouse at 55 Great Suffolk Street, on the corner of Loman Street, was probably speculatively-built to be let out to tenants, rather than for a particular firm or factory. The only known function associated with the warehouse is storage for Spicer Bros, paper merchants, in the late C19. Their factory survives close to this building at 180-194 Union Street. Spicer Bros probably bought or rented the warehouse from another company as they are not recorded at Loman Street in the 1882 Post Office directory, although entries do not always list every item of property occupied by a large company.

REASONS FOR DESIGNATION: 55 Great Suffolk Street is listed at Grade II for the following principal reasons:
* a notably unaltered warehouse of the mid-C19 complete with original windows, doors, loading bays, hoists and interior features;
* fairly rare survival relative to the great numbers of such warehouses which would have stood in Victorian Southwark.

No. 55 Great Suffolk Street has been designated at Grade II for the following principal reasons:
* a notably unaltered warehouse of the mid-C19 complete with original windows, doors, loading bays, hoists and interior features;
* fairly rare survival relative to the great numbers of such warehouses which would have stood in Victorian Southwark.