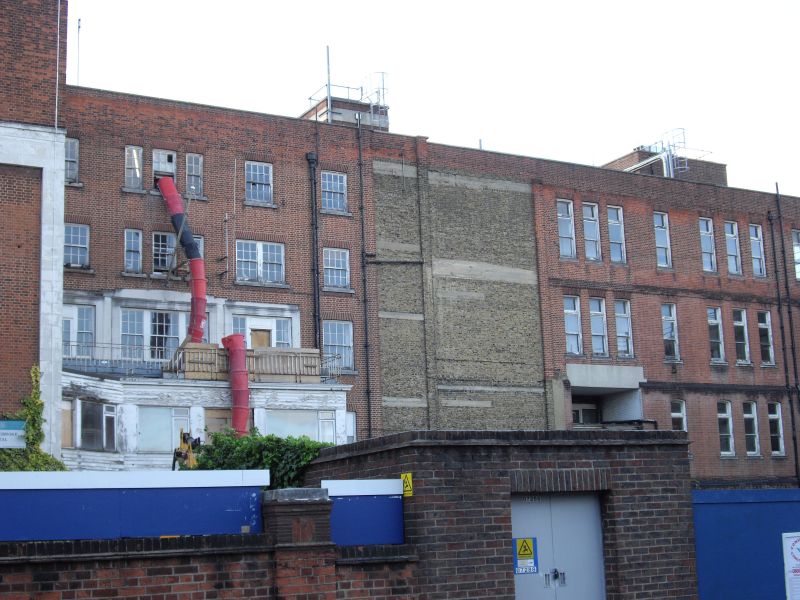 II
Hospital, built in phases between 1901 and 1936, by Young and Hall. Later additions and alterations.

EXTERIOR: a coherent and high-quality design despite being built in phases between 1901 and 1936. The elevation overlooking Wandsworth Common dates in the main to 1925-7 and comprises a central tower with pyramidal roof and splayed eaves which links a ward range to the south and the return of the elevation facing Wakehurst Road to the north. The Voysey-esque tower has three square windows just under the eaves, a large oculus with stone voussoirs and a plaque commemorating the opening of this, the Shepherd Wing, in 1927. To the right of this is a three storey ward block dominated by a projecting grid of concrete balconies (now glazed in but retaining original ironwork along the parapet). Above this the attic has dormer windows and a red pantile roof. The southern section of this elevation has stone quoins and curved balconies to the second and fourth floors, the former also glazed over but with some surviving ironwork. The return to Wakehurst Road is a long range, broadly symmetrical, with sections dating from 1901, 1906, 1925-7 and 1936. At its centre is a stone portico with paired Tuscan columns and balustrade which advances from a façade of regularly-arranged sash windows with rubbed red brick arches, stone cornice and tall attic with oculi. The cornice contains incised lettering reading 'The Bolingbroke Hospital' in capital letters and further lettering above the portico commemorates the founding of the hospital by Canon Erskine Clarke in 1880. This part dates to 1936 and links the flanking wings which were built in the 1925-7 phase. These two-window-bay wards are also in red brick with sash windows and stone quoins. Where the windows have brick aprons (the first three storeys of the westernmost section) indicates that this was part of the original wing of 1906. Further down Wakehurst Road, next to this block of 1906, is the oldest building on the site: the outpatients department of 1901, a single storey building with stone quoins and voussoirs to the large semi-circular-headed windows. The rear of the hospital, viewed from Belleville Road, is utilitarian. There are few embellishments here, save the altered classical concrete portico, and no commemorative plaques. The projecting wards of c1910-1915 are visible to the west of the site, as is a prefabricated former X-ray block (now the chapel), but have little architectural interest externally. The basement block on the site of the Georgian house demolished in 1937 is not of special interest.

SUBSIDIARY FEATURES: The site is bounded to the east and the north by handsome iron railings and brick and stone piers.

INTERIOR: much of the character of an early C20 hospital is conveyed through the surviving doors, windows, staircases, and terrazzo floors. The arrangement of rooms also survives well. The waiting hall with consulting rooms along its long side in the 1901 outpatients department, for example, is the same as shown in the original plans. The original Edwardian doors survive here too. Likewise, the Charles Ryall ward retains its original plan form of individual rooms or 'single-bed wards' as the original plans describe them. There have been alterations here, however: the balconies have been filled in and the doors and windows to the original bays replaced. The other wards are entirely typical of their date. The former X-ray room, now the chapel, is likewise unexceptional.

The CHILDREN'S WARD, on the other hand, is special. It dates from the 1925-7 phase of work and is located on the first floor overlooking Wandsworth Common, just north of the tower. The walls of the ward are clad in a remarkable set of contemporary tiles by WD Simpson depicting nursery rhymes in the style of children's illustrators such as Mabel Lucie Atwell or Kate Greenaway. There are thirteen painted panels in total including Humpty Dumpty, Jack and Jill and Simple Simon. There is also a scene showing tropical birds and bamboo branches on a smaller panel. The pictures are set in background of creamy yellow tiles above a dado of brown tiles. Below the dado the tiles are a vivid blue and there is a skirting of brown tiles. The same scheme of plain coloured tiles covers the three columns in the ward and a small side room near the entrance. This room has pictorial tiles too, these by Carters of Poole, showing animals including a monkey, rhinoceros, crocodile, turtle and ostrich. The floor in the main ward is parquet.

Another notable part of the interior is the LOBBY which dates from 1936. It comprises a vestibule with a reception booth and war memorial and an octagonal hall from which radiate three corridors. The walls have a pale green marble veneer and the surrounds of the doors are in a darker verde marble. The doors in the lobby and corridors have incised gilt lettering in their lintels announcing the titles of the occupants or the function, including matron, assistant matron, medical staff, porter, almoner, and waiting room. The entrances to the two lifts are similarly decorated. There are also windows in the corridors which admit light to the adjoining rooms; their surrounds are the originals. The floors are clad in reconstituted stone. The BOARDROOM, at the end of one of the corridors, contains original panelling, parquet floor, a fireplace and two bells to call the clerk or the porter.
HISTORY: The Bolingbroke Hospital was founded in 1880 in a converted C18 house overlooking Wandsworth Common. By the turn of the century, queues for the hospital's services occasionally stretched into the street and so, in 1901, a new outpatients department was built called the Victoria Memorial Wing after the recently-deceased sovereign. This survives to the west of the site and is the oldest part of the current building. The rest of the hospital was constructed in phases: the Erskine Clarke wing in 1906; a three storey ward block in c1910-15; the Shepherd Wing, including the Anne Carmichael Children's Ward and Charles Ryall Ward with single patient rooms, in 1925-7; the entrance lobby in 1936. The old mansion was demolished in 1937. This gradual expansion is part of the buildings special interest, in particular as many phases are marked through commemmorative plaques.

The hospital retained the services of the same architectural practice, Young and Hall, throughout this period of expansion. Initially comprising Keith Downes Young and Henry Hall, the latter's son Alner joined the practice after his father's death in 1909. Young lived until 1929 and so the work at Bolingbroke Hospital is likely to have been undertaken by him and Alner Hall; the 1936 phases are probably exclusively Hall. Young and Hall were a prominent practice in the field of hospital design. In the late C19 they gained a reputation for school sanatoria, completing buildings at Harrow, Shrewsbury and Sherborne Schools. Their commissions in the Edwardian period included the Hampstead General Hospital and the Chelsea Hospital for Women. At the same time as their principal work at Bolingbroke, the wards of 1925-7, they were also responsible for the rebuilding of the Middlesex Hospital in Fitzrovia, London.

Bolingbroke Hospital was established by the vicar of Battersea, Canon J. Erskine Clarke. Having served on the Board of Guardians and founded the Battersea Dispensary, Erskine Clarke recognised the need for a hospital for people who could afford to contribute a modest amount towards their care. His role is commemorated in the inscription above the 1930s portico. The Bolingbroke is thought to be one of the first hospitals to cater for the artisan and middle classes. In the late-C19, the sickly rich employed private nursing staff, whereas the poor sought help in a local dispensary or poor law infirmary. Erskine Clarke saw the Bolingbroke as a means of lessening the burden on the Battersea Dispensary by offering the middle classes somewhere they could pay a moderate amount for care.

REASONS FOR DESIGNATION: Bolingbroke Hospital is listed at Grade II for the following principal reasons:
* special both for displaying accretive growth from 1901 to 1936 and for the architectural interest of each phase, from Edwardian Free style, via Neo-Georgian, to 1930s Moderne;
* the work of Young and Hall, a practice renowned for health buildings;
* a rare set of tiles in the Children's Ward depicting nursery rhymes and animals by Simpsons of St Martin's Lane and Carters of Poole;
* the marble clad lobby, war memorial and radiating corridors are unusually lavish.

Bolingbroke Hospital is listed at Grade II for the following principal reasons:
* special both for displaying accretive growth from 1901 to 1936 and for the architectural interest of each phase, from Edwardian Free style, via Neo-Georgian, to 1930s Moderne;
* the work of Young and Hall, a practice renowned for health buildings;
* a rare set of tiles in the Children's Ward depicting nursery rhymes and animals by Simpsons of St Martin's Lane and Carters of Poole;
* the marble clad lobby, war memorial and radiating corridors are unusually lavish.