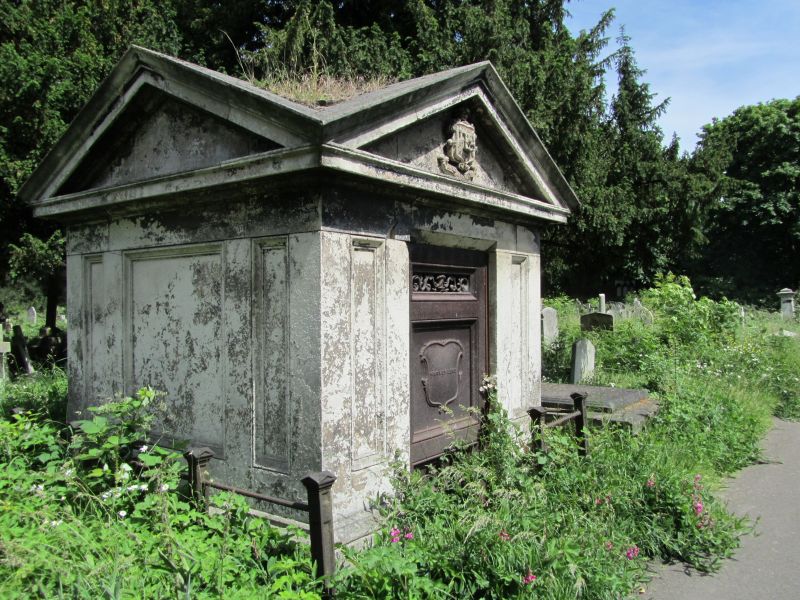 Square neo-classical mausoleum. Moulded plinth. Iron door in south side has three deeply recessed panels, that in the centre bearing a shield with 'Harvey Lewis' in embossed letters; the top ventilation panel has decorative openwork scrolls. Slim panels to either side of the door are duplicated on the other three sides, flanking large central panels. There is a pediment to each of the four sides; in the tympanum above the door are the arms of Harvey Lewis, the escutcheon bearing a lion passant on a chevron between three spearheads. This is surmounted by an ostrich-feather crest, with the Welsh motto 'Bidd Lu Heb Lydd' ('Unity and Strength') below. Railings surround the monument, the posts having neo-classical panels and pediments.

John Harvey Lewis (1814-1888) was born in Ireland and educated at Trinity College, Dublin. He was called to the bar in Ireland in 1838 but relinquished practice in 1850, becoming High Sheriff of Co. Kildare in 1857. He was the Liberal Member of Parliament for Marylebone from 1861 to 1874, under Prime Ministers Palmerston, Disraeli and Gladstone. His first wife Emily Owen Lewis, whom he married in 1840, died in 1850 at the age of 36. Her body was placed in a vault in Mount Jerome Cemetery, Dublin and later re-buried in the mausoleum at Brompton Cemetery in November 1854.

* Architectural: an imposing Portland stone mausoleum in a neo-classical style complete with railings and family crest;
* Group value: with other listed tombs in the Grade I-registered Brompton Cemetery.