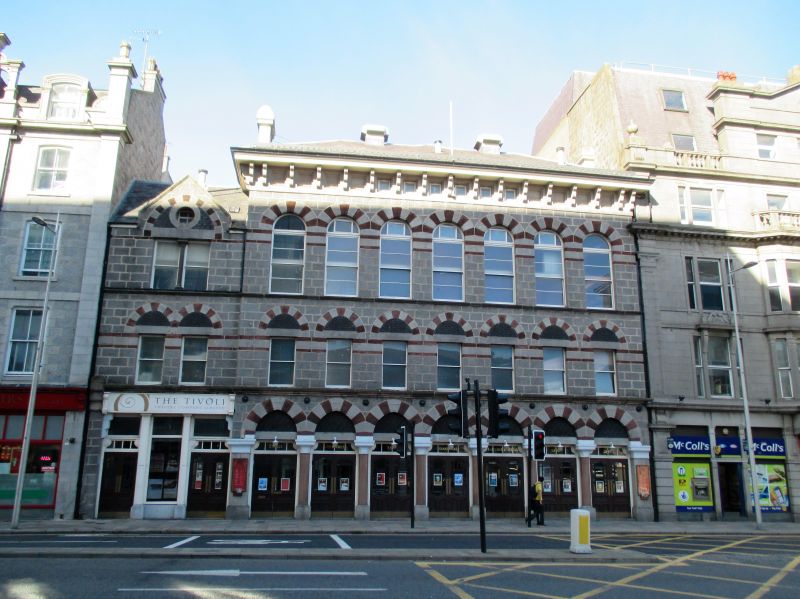 The Tivoli is an outstanding and rare, near intact example of a Victorian theatre. It has a distinctive and striking entrance façade and an excellent interior decorative scheme. The building is the result of the work of two renowned theatre architects, C J Phipps and Frank Matcham. The interior has been described as one of the best remaining examples of Matcham's work in the United Kingdom (Walker 1980). The entrance elevation uses red and grey granite to create a polychromatic, round arched pattern, which makes an unusual and significant contribution to the streetscape.

Originally known as Her Majesty's Opera House, the theatre was originally built by C J Phipps and James Mathews and contains the first large-scale use of concrete in a theatre building in Scotland.

In 1897, Frank Matcham was asked to redecorate some of the building and also to improve the fire exits. The Tivoli closed in 1906 after the opening of the new His Majesty's Theatre nearby (see separate listing). In 1909, however, in preparation for re-opening, Matcham carried out a further scheme of improvements and reconstruction, which included extending the balcony forward to leave single boxes by the side of the stage. These works cost £10000. The theatre re-opened in 1910, changing its name to the Tivoli.

C J Phipps (1835-1897) is considered to be one of the first great theatre specialists of the Victorian Theatre. Based largely in England, his output includes The Garrick in London. He was succeeded by Matcham and others, whose designs tended to be more extravagant.

Frank Matcham (1854-1920), was one of the most respected theatre architects of the early twentieth century. Working around the UK, he designed more that 200 theatres, including the Kings Theatre in Glasgow (see separate listing), although only around 25 of his theatres now survive. As a largely unaltered building, The Tivoli is therefore an important remaining record of his work.

The Tivoli was primarily a variety venue and hosted many famous Scottish performers, including Harry Lauder, traditional fiddlers, Andy Stewart and The White Heather Group. A popular theatre, the queues for performances often stretched down Guild Street in both directions.

The theatre closed in 1966. It functioned later as Bingo Hall, but this too closed in 1997.