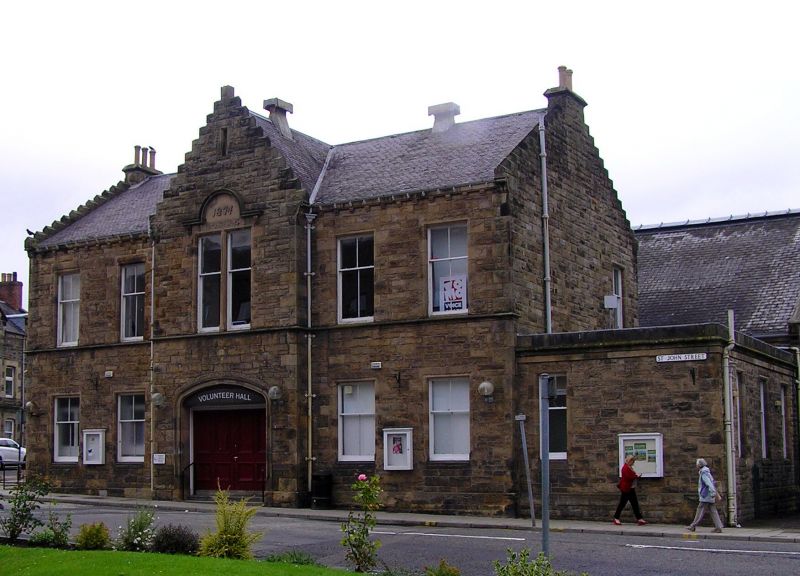 William Stirling, dated 1874 with later additions. 2-storey, 5-bay, symmetrical rectangular-plan former drill hall comprising an upper hall and administrative block, a large main hall to the rear and a slightly later flat-roofed single storey extension infilling the re-entrant angle to the east. The building is of squared snecked rock-faced sandstone with smooth chamfered arrises to the window margins, and there is a projecting base course; moulded cill course at first floor and a stone bracketed banded eaves course. The south (entrance) elevation has a central and advanced crow-stepped gable with a wide stone archway, a bipartite window at the first floor with a rounded and bracketed hoodmould over a datestone, and an arrow slit opening at the gablehead. There is a moulded cill course at the first floor and a stone bracketed eaves course. The hall to the rear is constructed in rubble stonework with plain banded eaves course and has staged gable buttresses set between round arched windows, ball finials on the gable apexes, a small flat-roofed porch and basement boiler house steps to the east. There is a small, 20th century rendered extension to the rear with steps, and a low coped wall with cast iron railings to the west.

The windows are predominantly 4-pane glazing in timber sash and case frames and there are timber panelled doors. The roof has grey slates and there are short corniced end chimney stacks with slender octagonal clay cans and boxed ridge ventilators. The gables are crowstepped (stone skews to main hall) and have decorative skewputts. The rainwater goods are cast iron and the the are downpipes recessed behind the string course.

The interior, seen 2006, has a good later 19th century civic decorative scheme in place with a pair of plaster lion head corbels to entrance hall, egg and dart cornices to the ground floor room and a floral cornice to the first floor hall. The dog-leg stair has decorative cast iron balusters leading to a timber balcony overlooking the main hall. The main hall roof structure is cast iron with tension rods. The former keeper's rooms and armoury to the ground floor are now converted to offices and public toilets.

The St John's Street Volunteer Hall is a purpose-built drill hall with well detailed stonework, symmetrical design and a good quality yet simple interior decorative scheme. It is a prominent building in the street, positioned at the foot of Bank Street opposite the Burgh Chambers and Public Library with which it forms an important group of civic buildings.

The Volunteer Hall was built by the Galashiels Rifle Volunteers on land gifted by Mr Hugh Scott, Laird of Gala. The Volunteers raised the majority of the build cost of £4000 by subscription between themselves and the people of the town. There was much civic pride invested in the hall and it was formally opened on 17th June 1875 with an inaugural grand bazaar opened by Captain Plummer of Sunderland Hall.

An article in the Scotsman of 18 June 1875 records that the building was designed by William Stirling, a Sergeant for the 1st Selkirk (Gala). Born about 1852, Stirling is recorded as an architect in the census of 1871 and by 1889 he had become the burgh assessor of Galashiels. The Scotsman article notes that the Robert Hall and Co. were the contractors for this drill hall.

The main hall was originally open plan, built to a size of 88 feet by 60 feet and lit by the twin windows in each gable. A stage was added in the late 19th / early 20th century in order that the hall could be used for theatre performances and other staged events. As well as drill practice the hall was regularly used for theatre productions, both amateur and professional and it was used as the town cinema until the Pavilion Cinema was opened in Channel Street in 1911. The hall continues to be used as a venue for live music and dramatic events (2006).

In the late 1850s there was concern in the British Government about the Army's ability to defend both the home nation as well as the Empire. Britain's military defences were stretched and resources to defend Britain needed to be found. One solution was to create 'Volunteer Forces', a reserve of men who volunteered for part-time military training similar to that of the regular army and who could therefore help to defend Britain if the need arose.

In 1859 the Rifle Volunteer Corps was formed and the Volunteer Act of 1863 provided more regulation on how the volunteer forces were run and it set out the standards for drills and a requirement for annual inspections. Most purpose-built drill halls constructed at this time were paid for by a major local landowner, the subscriptions of volunteers, local fundraising efforts or a combination of all three. The Regulations of the Forces Act 1871 (known as the Cardwell Reforms after the Secretary of State for War, Edward Cardwell) gave forces the legal right to acquire land to build a drill hall and more purpose-built drill halls began to be constructed after this date. The largest period of drill hall construction, aided by government grants, took place between 1880 and 1910. The Territorial and Reserve Forces Act 1907 (known as the Haldane Reforms after the Secretary of State for War, Richard Haldane) came into force in 1908 and the various Volunteer Units were consolidated to form the Territorial Force. The construction of drill halls largely ceased during the First World War and in 1920 the Territorial Force became the Territorial Army. In the 20th century changes in warfare and weaponry made many of the earlier drill halls redundant and subject to demolition or change to a new use.

Around 344 drill halls are believed to have been built in Scotland of which 182 are thought to survive today, although few remain in military use. Drill halls are part of our social and military history, telling us much about the development of warfare and the history of defending our country. Unusually for a nationwide building programme, designs were not standardised and local architects were often employed, using a variety of styles.