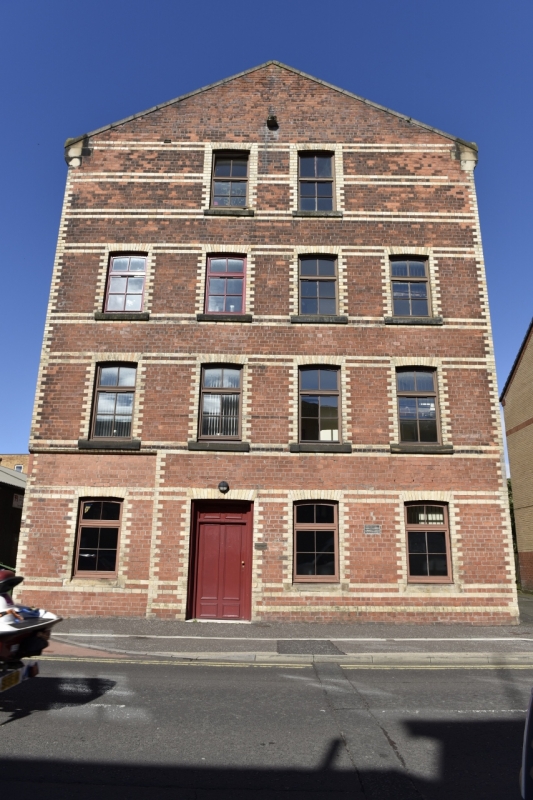 The former Greenhead Weaving Factory is a well-detailed industrial building characteristic of the former industrial area of Bridgeton. Founded in 1888 by Thomas Thomson, a power-loom cloth manufacturer, this is a late example of a multi-storeyed power-loom weaving factory. By the 1880s most new factories of this type were single-storeyed. Red and white brick construction was typical of industrial buildings in the east end of Glasgow and the use of polychromatic brickwork makes this building a significant part of the commercial and residential streetscape.

Greenhead Weaving Factory was constructed at a cost of £4000. In 1900 a five-bay block of single-storey weaving sheds was added to the rear of Greenhead Weaving Factory, which has subsequently been demolished. These sheds and part of the factory were occupied between 1906-8 by the short-lived All British Car Company. This company was founded by George Johnston, formally with Arrol-Johnston, to manufacture a 54hp eight-cylinder car. However the car was complex to produce and only 12 vehicles were completed.

Ninian MacWhannell was born in Glasgow in 1860 and commenced practice in 1885 with John Rogerson. The practice designed a number of buildings in Bridgeton, including the Clyde Dye Works, engineering works in James Street and the now-demolished John Street School.

Bridgeton was a weaving village built on the Barrowfield lands in 1705. It was known as Barrowfield until 1775-6 when the Rutherglen Bridge was built along with a new road to the north boundary, now known as Bridgeton Cross. The advent of steam power and increased mechanisation at the end of the 18th century led to the construction of many mills as well as its associated textile industries such as dyeworks and bleachfields in Bridgeton. The area became the industrial suburb of Glasgow and was annexed to the city in 1847. Few firms survived World War 1 and the subsequent trade depression. Only a few former weaving factories in the area survive, such as the former Barrowfield Weaving Factory (see separate listing).

The building was converted to flats in 2003-05 by McPhail Street Properties Limited.