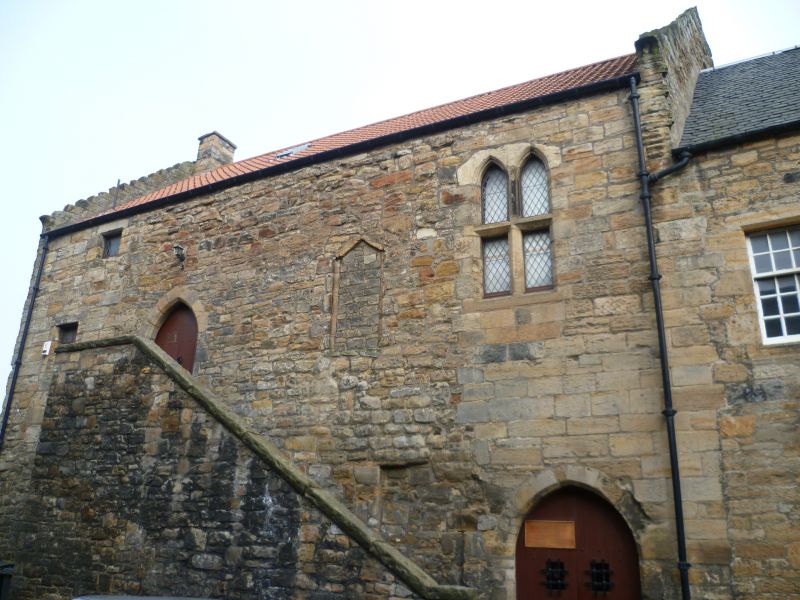 Upgraded to category A, 8 December 1997. These buildings form part of a nationally important late medieval ecclesiastical settlement. While clearly revealing mid 14th century fabric, these buildings also demonstrate significant development in domestic burgh architecture of the 17th century. The archaeology of the site has also been recognised as important to the region. These buildings were originally built as part of the convent of the Franciscan Friars (Greyfriars) which was also known as 'The Palace', a term sometimes applied to friaries or priories. This friary also held royal connections to Annabella Drummond, wife of Robert III and mother of James I, who occasionally resided at the hospitium when visiting Inverkeithing. The name 'Rotmell's Inn' was also associated with the present building, originating in late 17th century when Robert Menzies of Rotmell was the proprietor. A friary was probably established on this site after 1346, but was fully equipped by 1384, the date Robert II granted the remission of alms due to the Crown and all other secular burdens. The friary was secularised when it was purchased by John Swynton (burgess of Inverkeithing) in 1559, shortly before the Reformation. The hospitium (W range of the friary) had originally extended farther to the S and to the N. In its massive walls and vaulted chambers it still retains much of its 14th century construction. The wing contains 2 vaulted chambers both entered from a vaulted passage found at the S end of the main block. In the 17th century, the hospitium was remodelled as a tenement. At this time, 2 forestairs were added to the W elevation, while a newel-stair was built to the E within the re-entrant angle. Work carried out by the Town Council in 1934-1937 under the direction of H M Board of Works reinstated medieval features. Work included the reopening of lancet windows, restoration of the original openings to the S passage between the main block and S wing, and removal of the southmost forestair. The upper floor and S wing still accommodate Inverkeithing Museum while the ground floor is used as a community centre for the elderly (2003).