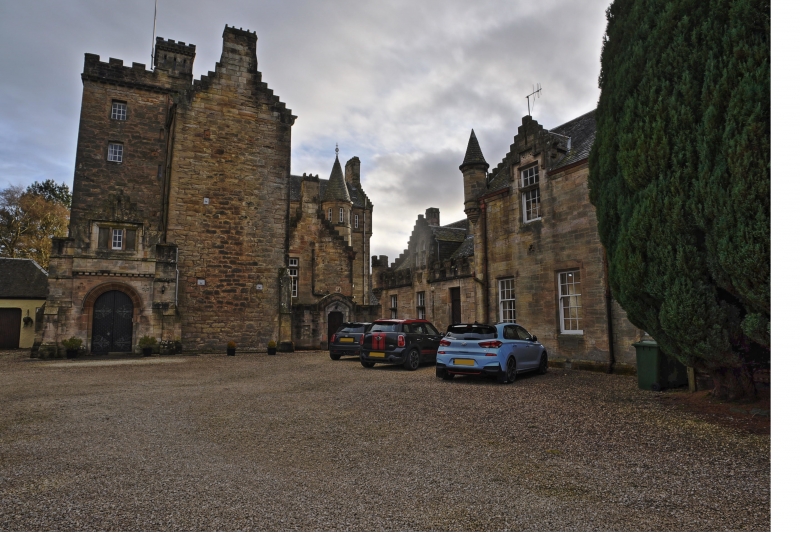 SE RANGE: attached to 1879 house; 3 round arched openings with keystones in 3 bays from left; 2 flat arched openings (now glazed) to right; door, pair of windows, window and door, 2 pairs of windows and single window on rear from left.

A-Group with Calderglen Country Park Ranger's Office, Calderglen Country Park Bridge, Calderglen Country Park Lodge, Sir John Falstaff and Calderglen Country Park Gatepiers. Roger Hamilton built Torrance House in 1605, on the site of Torrance Castle. In 1650, James Hamilton of Shields inherited the estate and sold the house and accompanying lands to James Stuart of Castlemilk. It was during the Stuarts' occupancy that the house metamorphosed from the original L-plan tower house into a sprawling mansion house. Sadly, the west pavilion and link were destroyed by fire in 1966, resulting in the present lop-sided plan of the house. In 1740, William Adam drew up plans for alterations and additions to the mansion house, which are included in VITRUVIUS SCOTICUS, plates 139 and 140. These designs were unexecuted. Alterations were made to the house in the late 18th century and seem to follow Adam's designs. Drawings in the National Library of Scotland closely resemble the alterations that were made at Torrance House during the 18th century and an engraving survives showing the house at the end of the century. In 1879 Colonel Harrington Stuart remodelled the 18th century additions in the Scots Baronial style. Colonel Harrington Stuart also erected an entrance porch and colonnades to the house, as well as building a gate lodge and baronialising the approach road. Between 1948 and 1966 the house became the office of the East Kilbride Development Corporation. The property remained empty during the 1970s and fell into disrepair. In 1979, East Kilbride District Council saved the house, restoring and converting it into two private dwelling houses. The estate remained in the ownership of the council and was opened to the public as a country park. The tower house and 19th additions are in private ownership. The 18th wing and stable court are part of the Calderglen Country Park.