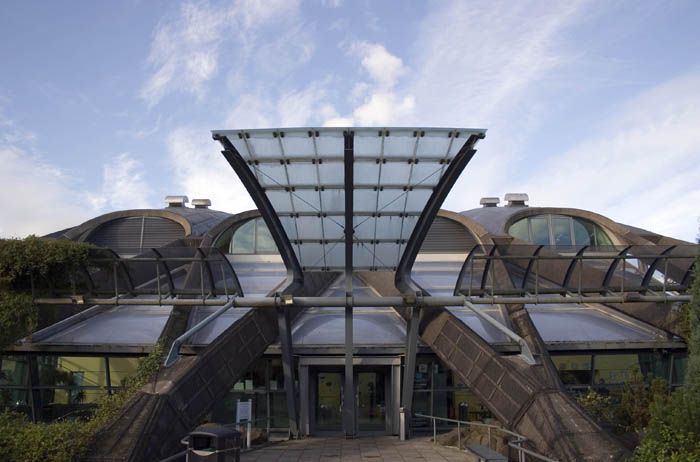 E (ENTRANCE) ELEVATION: double-door, glazed entrance with splayed glass and metal canopy between central buttresses; smaller canopy runs across centre of buttresses; extending beneath buttresses is a conservatory (part of 1990s renovation); arches of the roof canopy are glazed.

N ELEVATION: broad bands of brick and slim bands of glazing up to halfway; panelled strips to upper part with outbuilding; flume attached to right.

The Dollan Aqua centre is an outstanding and rare example of a mid 20th century public amenity building in striking internationally inspired design. It was the first champion-sized swimming pool in Scotland and was inspired by Pier Luigi Nervi's Olympic complex in Rome; it is also very similar to the Olympic complex built for the 1964 Japanese Olympic Games. This synthesis of international themes sets the Dollan Aqua Centre apart from other British swimming pools of the period. The original design had been even more daring, using huge laminated timber beams, but these had to be substituted for cement because of transportation problems.

Alexander Buchanan Campbell (1914-2007) was articled to Gillespie Kidd and Coia in 1931, and continued a relationship with them, being nominated to the FRIBA in 1955 by Coia. He had a long career, amassing a large body of work almost exclusively in Glasgow and the surrounding areas.

The 1990s renovation of the building did not adversely affect the original exterior and transformed the swimming area into a multi-purpose pool. The original 1960s plan was for a 55-yard pool, a smaller teaching pool and separate changing areas. Faulkner Browns, as a result of the imperial measurements, were able to maximise the potential of the pool area by fitting a hinged plastic boom across it. Thus it can either be used as a training and competition pool or split into two 25m pools: a deeper one for serious swimmers and a shallower leisure pool. Furthermore, a floating floor was fixed so that the depth can be changed to suit varying needs. The old teaching pool was changed into a toddlers' pool and a flume was also added to enhance the appeal of the centre. To save on space the changing facilities became unisex. Another change that was made was the erection of a conservatory under the front buttresses. The immense parabolic arch (98.76m) is both visually striking and structurally audacious.

Further major refurbishment was begun in 2008 and completed in 2011 at a cost of £9 million. It was instigated by necessary structural repairs to the poolside but the wider refurbishment also involved structural repairs to the roof to incorporate insulation and a further external roof layer neither of which have affected the character of the original roof structure. The programme of works also included new internal ceiling to the pool area in the original profile, new boilers, ventilation systems, upgrading the pool system and retiling to the pool and changing areas.

Swimming clubs and bath houses were established in Scotland from the 1850s following the enactment of the 1846 Act to Encourage the Establishment of Public Baths and Wash-houses, which was established to improve general public health with access for all classes of citizen. With the rapid expansion of urban population, often living and working in unsanitary conditions, bath and wash houses were seen as essential public services. The Act, which affected the entirety of Britain, encouraged local authorities to open up these facilities in areas of dense population. While men and women did not mix at these facilities, women would have had their own separate entrance, however they would have to attend at certain times when the male pools were not in use. It would not be until the 1870s when separate ladies pools were being considered in bath and wash house design. These bath and wash houses soon started to cater for recreational swimming rather than washing and became a hugely popular social past time during the 20th century. With the gradual demise of public washhouses and increasing demand for year round swimming, a higher grade of recreational facility was sought, and so by the 1960s local authorities were providing new swimming pool complexes of which the Dollan Aqua Centre is a very fine example.