A Category C Listed Building in Oban North and Lorn, Argyll and Bute 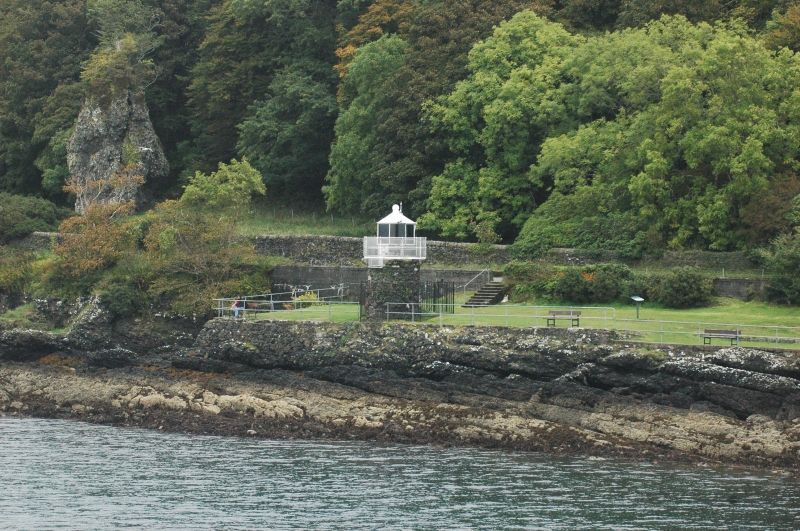 Dunollie Lighthouse was built in 1891-1892 by the Northern Lighthouse Board under the supervision of their engineers David A. Stevenson and Charles Stevenson. The lighthouse is a minor light, located 400m to the south of Dunollie Castle, on the shorefront at the northern edge of the town of Oban. It marks the northern channel entrance to Oban Bay and the Sound of Kerrera, a sheltered seaway separating the island of Kerrera from the mainland.

The lighthouse stands around 7m above mean sea level within an enclosure of wrought iron railings. The lighthouse building is a small circular stone tower with battered walls, measuring 6m in height. The tower is built of dark rubble whinstone. A top course of protruding boulders forms a parapet that supports a circular gallery around the lantern, enclosed by a galvanised safety barrier. A metal ladder provides access from ground level on the east side of the building, to the lantern gallery. On top of the gallery roof, there is a hexagonal-shaped white lantern with rectangular windows facing out to sea and a colimiting screen to restrict the angle of the light.

In accordance with Section 1 (4A) of the Planning (Listed Buildings and Conservation Areas) (Scotland) Act 1997 the following are excluded from the listing: the metal railings surrounding the lighthouse.

During the late 19th century, growing use of Oban Harbour by both commercial and yachting traffic, brought about calls for improved lighting and buoyage marking the northern entrance to Oban Harbour.

On 5 November 1886, initial representations were first made to the Commissioners of the Northern Lighthouse Board on behalf of the Town Council of Oban (Glasgow Herald Thursday 12 February 1891). The council observed that during a one-month period in 1866, 'upwards of 300 vessels of 50-30 tons made use of the anchorages at the northern end of Oban Bay'.

Applications by the Oban Harbour Authority and Town Council to the Commissioners were renewed on a number of occasions but these were refused due to concerns that the benefits of the lighthouse were 'too local' to merit funding by levy of a charge against the mercantile marine fund (Glasgow Herald - Friday 18 September 1891). In 1890 the Commissioners presented a report in which they remarked on the need for a light, to be maintained by the harbour authority, to be placed near the foot of Dunollie Castle, 'that would enable vessels to enter Oban harbour without much difficulty' (Glasgow Herald Thursday 12 February 1891). The erection of the lighthouse was recommended by the West Highland Commission, with funds to be provided from the West Highland grant (Glasgow Herald - Friday 18 September 1891).

Construction of the lighthouse began in September 1891 under the supervision of the Northern Lighthouse Board engineers. The light was supplied by mains gas from the Oban town supply and first shone on 13 February 1892 (Notice to Mariners Greenock Telegraph and Clyde Shipping Gazette - Thursday 04 February 1892). The light continues in operation [2020].

Dunollie Lighthouse meets the criteria of special architectural or historic interest for the following reasons:

In accordance with Section 1 (4A) of the Planning (Listed Buildings and Conservation Areas) (Scotland) Act 1997 the following are excluded from the listing: the metal railings surrounding the lighthouse.

Dunollie Lighthouse is of design interest as a rare example of a Stevenson lighthouse built in a rustic style using whinstone, reflecting the regional building traditions in Argyll & Bute and Lochaber. Indeed, Hume (see Canmore ID158110) observed that the rustic masonry at Dunollie Lighthouse appears to be unique in a Scottish Lighthouse, contrasting starkly with the highly stylised designs and painting schemes for which the Stevensons became renowned during the 18th, 19th and early 20th centuries.

The style of the lighthouse appears to have been heavily influenced by its proximity to the ruined remains of Dunollie Castle (SM293), ancient stronghold of the MacDougall family. The remains of the tower house and associated bailey stand on a rocky ridge above Port Mor, guarding the entrance to Oban Bay and overlooking the lighthouse. Hume also observed that the ornamental treatment of this light might be due to its position in front of some high-class hotels.

When first built, the light would probably have been powered by compressed gas stored in a tank presumably located inside the building. Since 1979 this light has been fitted with 'collimating screens'. The light is now [2020] powered by solar panels and all storage tanks appear to have been removed. Otherwise the building appears largely unaltered.

The location for lighthouses and beacons is critical to their function. Dunollie Lighthouse occupies a prominent location on the seafront at the northern entrance to Oban Bay close to Dunollie Castle. Oban is an important harbour on the west coast of Scotland, particularly for fishing vessels, yachting, ferries and other coastal traffic. Admiralty Chart 2476 (revised to 1901) shows that the lighthouse was lit at that time with a red and white sector light that enabled seafarers to identify the safe channel at night, when entering and leaving Oban Bay, avoiding a shallow area off the Oban shore, known as the Corran Ledge, and also shallows on the Kerrera shoreline.

The lighthouse continues to perform the same function, remaining visible from the sea, and from the coast. Its nearby coastal setting is largely un-changed and this contributes to our understanding of the building's function and historical context.

Dunollie Lighthouse is of interest as a rare unaltered example of an early 20th-century minor light. It is one of 75 un-manned minor lights built around Scotland by David A and Charles Stevenson after the first introduction of automated lights with temporary beacon lights in the Sound of Mull and at Stroma in the Pentland Firth in 1890 (Munro 1979: 200) and the conversion of the Oxcars Lighthouse from oil to gas-powered light in 1894 (Strachan 2016). Unlike Dunollie Lighthouse, many of David A. Stevenson's minor automated lights were of a standardised cast-iron design.

There are over 200 operational Northern Lighthouse Board lighthouses within Scotland, with many other examples either decommissioned or operated by other organisations and groups. They range from elegant stone pinnacles on remote reefs far out to sea, to small navigational beacons and modern modular lights. Of these, around 150 lighthouses of various shapes, sizes and types are currently designated as either listed buildings or scheduled monuments, representing a wide range of specific navigational dangers that required marking. Dunollie Lighthouse is classified as a minor light. Many of the minor lights have been replaced or substantially altered. Although the light has been changed to solar power, the building of Dunollie Lighthouse generally survives in its 19th-century form.

Dunollie Lighthouse is of social historical interest in helping us to understand this system of seamarks and the contribution they made, alongside major and minor lights, in safeguarding shipping around the coast of Scotland.

The significance of Scotland network of lighthouses and beacons to the country's history is high. As an island nation with over 18,000 kilometres of coastline and over 900 islands, maritime industries such as fishing, coastal trade and transportation have long been significant social and economic factors. Scotland's coasts are also located on international sea-routes linking northern Europe with the rest of the world. The use of lighthouses and beacons was therefore vital to the safety of shipping in Scottish waters. Prior to the construction of Scotland's lighthouses, most navigation markers were landmarks visible only during daylight, and so nautical navigation at night or in poor conditions was a highly dangerous but sometimes unavoidable undertaking. This is reflected in the large numbers of records of ships and sailors lost in wrecking incidents around the coasts of Scotland during the 19th and 19th centuries.

The first lighthouse in Scotland was established on the Isle of May (SM887) in 1636. This light aided navigation into the many harbours around the Firth of Forth and took the form of a stone tower mounting a coal fired brazier. Although the Isle of May beacon was far from as bright as later examples, in good weather it good be seen from as far as the entrance to the Tay, and it would remain operational for 180 years. The Isle of May was followed by several other lighthouses and beacons being built from the late 17th century, improving navigation for the Tay, the Solway and the Clyde.

A common factor in all the lights established in the first 150 years was that they were conceived, built and operated by private interests and organisations, such as local magistrates, councils and individuals, supported by the king and parliament when necessary. By the early 1780s, however, there was a growing recognition that many shipping and navigational dangers existed far beyond the profitable harbours and estuaries that had driven the development of the early lights. To address this, in 1786 parliament passed "An Act for erecting certain Light-houses in the Northern Parts of Great Britain" and established a board of Commissioners (subsequently to become the Commissioners of the Northern Lighthouses and then the Northern Lighthouse Board), initially to undertake the work of building and maintaining lights at four locations, including Kinnaird Head (LB31888), Eilean Glas (LB13487), Mull of Kintyre (LB19874) and North Ronaldsay (SM6596). These lights were the work of the Board's first engineer, Thomas Smith, and his assistant Robert Stevenson, and used improved lighting technology in the form of whale oil burners and mirrored reflectors to enhance the brightness.

Following the 1786 Act, the number of lighthouses around the coasts of Scotland began to rapidly grow, along with the technology and engineering skills employed. By the early 19th century oil lamps were replacing the earlier coal burners, and Robert Stevenson had been able to design and build a lighthouse on the Bell Rock (LB45197). Throughout the 19th and early 20th century, Robert Stevenson and his descendants continued to push the boundaries of technology and engineering to expand the network, including lights on Skerryvore (LB17489), Muckle Flugga (LB17479), Dhu Heartach (LB12320), and the Flannan Isles (LB48143).

In addition to the major lights, a system of network of minor un-manned lights was introduced from the 1890s. Munro (1979: 199-200) considered that the establishment of minor lights on the Scottish coast arose from a policy of encouraging fishing to develop in the Highlands and Islands, following the Napier Commission's inquiry of 1883-4. A report in 1890 stressed the need for additional lighthouses and beacons to help the fishing fleet and sea communications in areas that were largely unlit at that time. The Dunollie Lighthouse was one of several minor lights built around Oban and the Sound of Mull at an early stage during the phase of minor light construction (see Munro 1979 for other examples at Ardtornish Point, Morvern, and the Grey Rocks) and is notable for the involvement of the West Highland Commission in recommending its construction and contributing to the costs.

Association with people or events of national importance

The buildings have a close historical association of national importance.

Dunollie Lighthouse is one of the earliest surviving minor lights erected under the supervision of the Stevenson family, a connection stretching back three generations and spanning over 150 years. David Alan Stevenson was born in 1854, and his brother Charles Alexander was born in 1855. They were the sons of David Stevenson, grandsons of Robert Stevenson and nephews of Thomas Stevenson, all also distinguished lighthouse engineers for the Northern Lighthouse Board. Their cousin was the author Robert Louis Stevenson. The efforts of the Stevenson family in designing and constructing the network of lighthouses around Scotland's coasts, often against seemingly overwhelming odds, has led to their collectively being known as the "Lighthouse Stevensons", and as some of Scotland's greatest engineering minds.