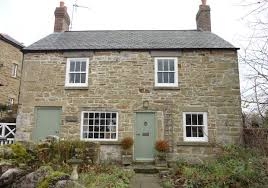 Location: On the NW side of the church, its gable end abutting the churchyard wall

Mullioned windows in the gable end suggest a C17 origin for the house, which is shown on the 1839 Tithe map. It was altered in the final quarter of the C19 and is shown as a post office on the 1899 Ordnance Survey. The Post Office closed c1990.

A 2-storey 2-window house of rubble stone with bigger quoins, and slate roof with C19 brick stack to the L and C20 brick stack to the R. In the upper storey are 6-pane sash windows beneath wooden lintels and with stone sills. A similar window under a stone lintel is lower R, to the L of which is a boarded door in a doorway enlarged from an earlier doorway of which the R-hand jamb and part of a segmental head survive. Further L is an enlarged window (lighting the former post office) under a wooden lintel and an inserted boarded door at the L end.

The R gable end, facing the churchyard, has 2-light mullioned windows in both storeys. A rear wing offset to the R side of the house is set back from the gable end, and facing the churchyard has a 3-light window with iron bars under a concrete lintel. A lean-to is added to the gable end of the wing and has concrete pantiles. On the L side of the house is an added rear outshut.

Listed as a prominently-sited house retaining C19 character but with earlier origins, and for its contribution to the historic character of Llanasa.