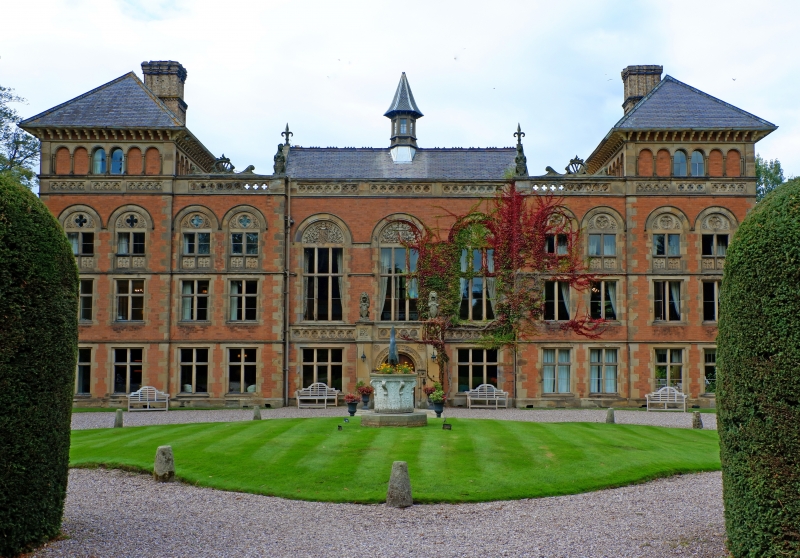 Location: Reached by the S driveway, a formal tree-lined avenue, and set in parkland.

The present house was first built c1727 for the Conway family and was Baroque in style. It was fitted out after 1732 for the Rev John Wynne, Bishop of St Asaph (1714-1727) and subsequently Bath & Wells. His daughter married Henry Bankes of Kingston Lacy, Dorset, and the hall remained in the ownership of the Bankes family until the 1980s. The house was remodelled several times in the C19 and there is no longer any external evidence for the C18 building. Major work was undertaken in the 1820s by William John Bankes and the architect, Sir Charles Barry. The exterior was remodelled, apparently in Spanish style, with the addition of the end towers and polygonal belvedere turret to the N front, which was intended to become the main entrance. Major internal alterations included the creation of the 2-storey saloon and adjacent dining room on the 1st floor with tall mullioned windows. Further internal alterations were carried out from 1855-68. In 1868, Soughton Hall was extensively remodelled in Italianate style by John Douglas, architect of Chester, for John Scott Bankes. The S porch was added, but in general, the main elements of the house were retained, but with renewed detail. It was refaced in red brick with stone dressings, including the insertion of further mullioned windows with tympana. Internal alterations were also undertaken, but several C18 features were retained, including the main staircase and wood carving in the entrance hall. Soughton Hall is now a hotel.

The string courses continue around the E and W ends of the house, along with the arcades from the end towers; 2 arches contain lights, the others are blind. The E end has 3 small round-headed attic dormers. The W end has a central oriel window to the 1st and 2nd storeys with a moulded canopy on brackets. Two-light windows, segmental-arched to upper storey with apron, flat headed with transom below. The single-storey extension to the front continues around the W end and contains service areas with a boarded door and 3-light window.

North front in similar, though simplified, style to S front, the central bay emphasised by polygonal tower over square porch, with slated spire, openwork belvedere and narrow lights. Round-headed entrance with attached shafts, scrolled capitals and c1200-style tympanum bearing a heraldic shield and inscribed 'Johannes Wynne Episc. Asaph Consec. 1714'. The tower is flanked by 3-light mullioned windows, 2-light to ground floor. The linking bays have pairs of 2-light windows, single-light to ground floor. Continuous parapets with a frieze of roundels. To the end towers, beneath the parapets, are cantilevered oriels on triple brackets with 3-light windows. Two narrow lights (between brackets) to ground floor.

The interior retains many exceptional features including the following: The front entrance leads into a central room which has a remarkable Italian Renaissance-style timber doorpiece which leads into the stair-hall to the L. It has fluted pilasters and an arabesque frieze with guilloche border. Door with panels bearing figures including a bust towards the top and mermaids. Similar detail to frieze over interior side of front door, with a bust, human figures and foliage. Although the central room is basically C18, the wood carving was probably collected by W J Bankes in the early C19 and is of much earlier date. The room also has a marble fireplace to the N wall with fine Jacobean overmantel bearing a coat of arms. Other good panelled fittings include doors, wainscot and a moulded panelled ceiling. The stair-hall has a Georgian open-well staircase, probably of 1727, with slender fluted balusters, swept handrail and ornamented tread ends. At the foot of it and continuing to the L is a C19 3-bay timber arcade with round arches on decorative square piers. To the L of the stair-hall is a small library with elaborate Gothic marble chimney piece and dentilled ceiling cornice. Further L at the W end of the house, is the Justice Room with cross-angle fireplace with large marble cartouche over, bearing a lion and figures. To the rear of the central room is a doorway leading to a corridor with former service rooms leading off. Towards the R is a C19 back staircase with Barleysugar balusters.

Fine 1st floor landing with inlaid wooden floors. To the L (E) is a massive fluted pilastered doorcase with panelled reveals containing huge double doors in a classical architrave. These lead into the saloon. The inner sides of the doors incorporate 4 inset panels of the Life of Christ, 6 cherub carvings and 4 carved friezes, along with a date 'Anno - 1662' (they were probably collected by W J Bankes or Sir Charles Barry). Rollmoulded joists and beams to ceiling of saloon with stencilled decoration, probably of the 1840s, High Victorian white marble chimney piece with inset decoration, linefold dado panelling, and elaborate arched and gilt valences to curtains. Adjoining to E is the dining room, a large 2-storey room with elaborate late Georgian cornice and High Victorian chimney piece. In the centre of the ceiling is an elaborate ogee frame with painted cherubs in recessed ovals, probably part of the 1820s remodelling. The staircase continues to the attic storey in a similar style.

Listed grade II* as an exceptional and well-detailed country house in the Italianate style, retaining fine C18 and C19 interior features, and for its historic interest.