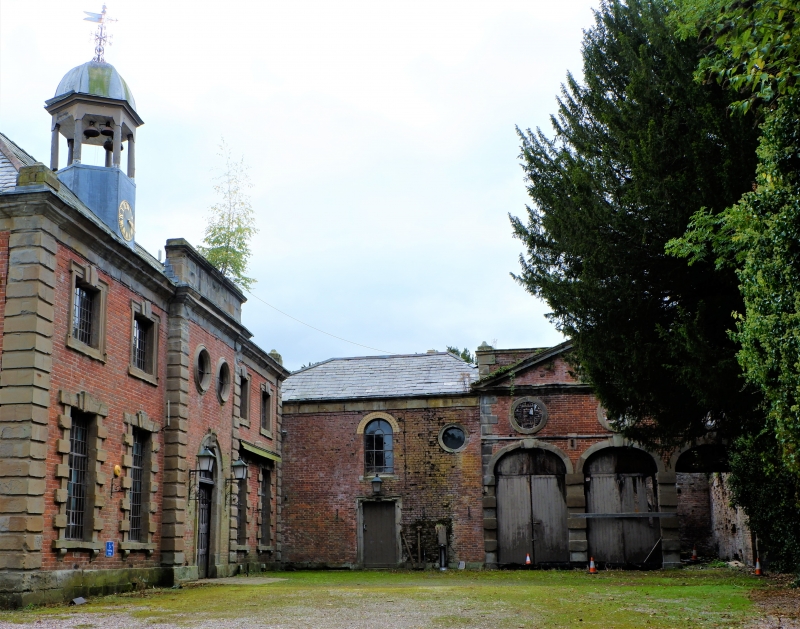 Location: In a tree-lined enclosure to the SW of the house and attached to the stable block at the SE corner. Tall rubble retaining wall to N, beyond which are formal gardens.

Soughton Hall was first built c1727 for the Conway family and was in Baroque style. It was fitted out after 1732 for the Rev John Wynne, Bishop of St Asaph (1714-1727) and subsequently Bath & Wells. His daughter married Henry Bankes of Kingston Lacy, Dorset, and the hall remained in the ownership of the Bankes family until the 1980s (it is now a hotel). The house was remodelled several times in the C19, including major work in the 1820s by William John Bankes and the architect, Sir Charles Barry. In 1868, Soughton Hall was extensively remodelled by John Douglas, architect of Chester, for John Scott Bankes.

Early Georgian coach-house, probably mid-C18 and contemporary with the stable block, but possibly c1727 and built for the Conway family. Extended to S by 1870 to connect with stables.

The parapets continue around the early Georgian block on a heavily moulded string course. No openings to N side; W side has small 2-light window under a segmental brick head to L of upper storey. Small brick gabled addition below. Brick stacks behind parapets. The C19 block continues to the R with a lateral brick stack. Central doorway blocked in brick, and small opening to top L, both with segmental brick heads. Small vents to this elevation. The S end of this block has a half-hipped roof and has undergone alterations; narrowed doorway offset to L with cambered brick head and boarded door, butt joint of former opening to R, and lintel of another opening to far R. Three upper storey windows as front, under round-arched yellow brick heads, and with margin glazing.

Listed grade II* as an early Georgian coach-house, which is one of the earliest buildings at Soughton Hall.